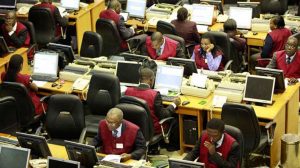 The Nigerian Stock Exchange (NSE) has notified dealing members that the Securities and Exchange Commission (SEC) has directed it to suspend trading in the shares of Oando Plc effective for 48 hours from today, 18 October 2017 to 20 October 2017.

The information is made available on Wednesday on the website of NSE.

It reads: “Dealing members are hereby notified that the Securities and Exchange Commission has directed The Nigerian Stock Exchange to suspend trading in the shares of Oando Plc as follows:

“Effective for 48 hours from today, October 18, 2017 to October 20, 2017, the exchange should implement a full suspension in the trading of the shares of Oando Plc; and effective from October 20, 2017 and until further directive, the exchange should implement a technical suspension in the shares of Oando Plc.”

SEC said it made the following findings at the end of its investigation: breach of the provisions of the Investments & Securities Act 2007, breach of the SEC Code of Corporate Governance for Public Companies, suspected insider dealing, related party transactions not conducted at arm’s length, and discrepancies in the shareholding structure of Oando Plc.

Two major shareholders of the company, Dahiru Mangal and Ansbury Inc, had submitted a petition to SEC demanding the postponement of the company’s annual general meeting and accused the management of gross abuse of corporate governance and financial mismanagement

At that time, SEC said it did not see any evidence to warrant a postponement of the annual general meeting, saying the petitions lacked merit.

At the AGM, which held in Uyo, shareholders retained Wale Tinubu as group CEO despite protests for his resignation by some shareholders.

In a statement by Oando, the protesters were described as non-shareholders “as all shareholders could have entered the venue to raise their legitimate concerns to management and the board”.