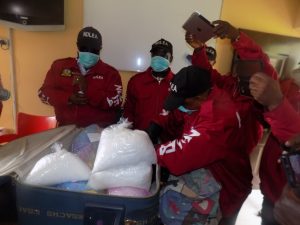 The agency described the allegations as lies.

THISDAY had recently reported that the officers agency ‎at MMIA are extorting money from passengers.

Jonah Achema, Principal Staff Officer, Public Affairs of the agency , said the reporter was in an exceptional haste to go to bed with the allegations that he refused all entreaties to visit the agency to cross check his facts, insisting that the NDLEA must respond to the allegations on phone.

He stated that the report was bereft of any integrity, stressing that the campaign was orchestrated to preempt the ongoing investigation into the suspicious drug activities of these so called officials, including those of cargo handling companies at the airport.

He said several of such officers have been prosecuted and convicted in the past while some others are still being prosecuted by the on account of involvement in drug trafficking.

Achema said it is instructive to note that NDLEA does not man any “station” at the said airport alone.

‎He stated: “the attention of National Drug Law Enforcement Agency ( NDLEA) has been drawn to a publication in This Day by Chinedu Eze, casting aspersion on the integrity of the officers and men of Murtala Muhammed International Airport, MMIA, Command of the Agency.

‎”The report failed a simple credibility test in several respects and left so many avoidable gaps. For instance, who are these officials of FAAN? Can they be anonymous if they are speaking for the management of FAAN? Does the reporter know that all activities at the MMIA are captured by the Close Circuit Television gadget? Did he preview the CCTV to establish the alleged misconduct? Does he know that every officer serving at the MMIA has been properly vetted and has undergone an integrity test conducted by reputable international body? Does he know that the Agency works closely with its international collaborators even at the Airport?

‎”The reporter went further to claim that the Agency has no business at the Airport under the present Ease of Doing Business Executive Order. Even if that was what the reporter was told and intended to convey by the publication, common instinct required that he juxtaposed this with the NDLEA Act which mandates it to have operational presence at all entry and exit points, MMIA inclusive.

‎”Within the last three months after the Executive Order, the NDLEA MMIA Command has made some remarkable seizures to the consternation of the reporter and his sponsors. The Command has arrested 19 suspects and seized a total of 14.030 kilogrammes of controlled and prohibited drugs, which consists of 2.575 Kilograms of Cocaine, 5.100 Kilograms of Heroin, 6.615 Kilograms of Methamphetamine, 73.440 Kilograms of Ephedrine, 66.300 Kilograms of Cannabis sativa and three (3) abandoned seizures.

“It must be noted that the Agency has never and will never shield any officer found wanting if there is any established evidence of misconduct against such an officer and not on account of idle allegations as in this case.

“The Agency, no doubts, sees the Media as a critical stakeholder in the efforts to disrupt and dismantle drug trafficking networks and ultimately defeat the criminal drug entrepreneurs. It is through a mutually reinforcing relationship between the Agency and the Media that this laudable goal can be achieved.”