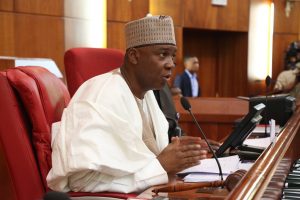 Bukola Saraki, President of the Senate,  says he called for an international conference on the Northeast and the Boko Haram so as to raise funds for rehabilitation of the region.

Speaking on Tuesday at the 137th Inter-Parliamentary Union (IPU) Assembly in St. Petersburg, Saraki said that the motive was to address the devastation caused by the Boko Haram insurgency in the region.

He averred that the number of Internally Displaced Persons (IDPs) in Nigeria was one of the highest in the world due to the damage caused by the Boko Haram group.

“The level of IDPs in Nigeria, though not as much as in Syria, but it is very high; second highest.

“So, the international community must hold a conference to be able to raise enough money and awareness.

“That kind of conference will bring in more donors and agencies that will contribute to rebuild the Northeast.

“We have not made much progress in rebuilding the Northeast because we cannot do it alone.

“The issue is how to sustain the peace that exists in the region enough to relocate people to their homes. That is where we are and that is the difficult part,’’ he said.

On allegations of corruption linked to funds released for rebuilding of the region, Saraki said such should not stop the call for international intervention because of the number of lives affected.

He said that the right thing was to investigate the allegations and bring culprits to book while continuing with the rehabilitation process.

“Corruption is not only in the management of the Northeast, we have corruption in other areas.

“It is, however, unfortunate that such is happening to people that need assistance; people displaced and who have lost their lives.

“We thought that will be the last place to hear of corruption. This shows how greedy people are that they cannot consider the humanitarian aspect of the problem.

“Through the efforts of the Federal Government, the National Assembly and the Armed Forces there is relative peace. Though there are still sporadic attacks but not as much as it was a few years ago,’’ he said.

The Senate President urged those berating President Muhammadu Buhari for requesting for foreign aid for rehabilitation of the region to appreciate the level of damage done to the region.

He said while not undermining conflicts in other parts of the country, seeking for aid for the region was not out of place.

Saraki pointed out that “for the president to ask for focus on the Northeast; I think it is appropriate, to address the issue of Boko Haram.

“I am not saying there are no issues in other regions of the country but you will agree with me that it is the greatest danger faced by the country.

“It is only that now because of the achievement of the Federal Government, we are all getting a bit relaxed and asking questions about focusing on rebuilding the area or not.’’

He called on Nigerians to rise above sentiments, particularly on issues that pose great threat to human lives.