I will never go back to PDP- Obasanjo 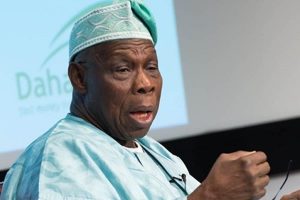 Olusegun Obasanjo, former President, has once again vowed that he will never return back to the People’s Democratic Party (PDP).

He made his position known in a brief interview with journalists shortly after he met with Ahmed Makarfi, National Caretaker Chairman of the party, behind closed-doors.

Quoting an old adage that a dog would never go back to his vomit, the former president said he have vowed never to return to the People’s Democratic Party.

The meeting was held at the Olusegun Obasanjo Presidential Library, Abeokuta, which lasted for one hour.