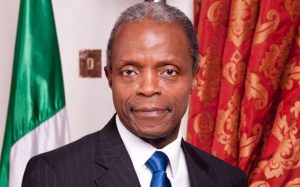 Vice President, Professor Yemi Osinbajo says he granted authorisation to two ventures from the NNPC while President Muhammadu Buhari was away on medical leave.

Professor Osinbajo said on Thursday, that the approvals were specifically for financing joint ventures through loans and not contract.

His reaction comes in the wake of the scandal rocking the Nigerian National Petroleum Corporation (NNPC).

Laolu Akande, his spokesperson, had tweeted earlier that the Vice President approved the joint venture financing in his capacity as Acting President in July.

Ibe Kachikwu ,Minister of State for Petroleum, had in a leaked letter over week to President Muhammadu Buhari, accused the Maikanti Baru, Group Managing Director of the NNPC,  of insubordination, disrespect and of awarding contracts without due process.

But Baru denied the allegations insisting that due process was followed and appropriate approval received from the President.

His response led to questions about how the President who was away on medical vacation when some of the contracts were awarded approved them.