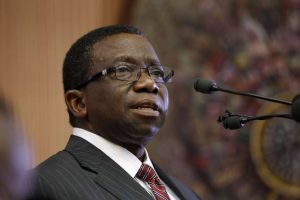 Isaac Adewole , Minister of Health, has said that  The federal government will begin a nationwide vaccination against yellow fever by December.

This, he said is as a result of the current outbreak of yellow fever which started in Kwara state last month.

He made the disclosure on Wednesday while briefing State House correspondents after the Federal Executive Council (FEC) meeting.

While giving the report on the public health situation in the country, Adewole said so far, the country has recorded ten cases of yellow fever this year: four cases in Kwara state, two in Kogi, two in Plateau, one in Abia and one in Edo state.

He said the ministry will start a campaign in Kwara and Kogi starting from Friday13 of this month.

“We have also decided to start a nationwide vaccination against yellow fever; we are going to bring that forward to December because of what is currently ongoing.

“We quite recognise the fact that we have a large number of Nigerians who are not immune to yellow fever and so we want to do a nationwide vaccination against yellow fever,” he said.

The minister also gave reports on how the ministry has been tracking several other diseases’ outbreak in the country.

There have been outbreaks of Cholera, Lassa fever and just of recent, suspected cases of monkeypox in the country.

On the status of the fever in the country, he said there had been no report of new confirmed cases of the disease adding that the Cholera outbreak in the country is also on the decline.

“We also reported the declining case of Cholera in Borno state and we are quite happy that no death has been reported from Borno state.”

There had been more than 1000 suspected and confirmed cases of Cholera which included 30 deaths from the disease in Borno state especially at the internally displaced persons, IDPs camp as at September.

Speaking on the latest monkeypox outbreak, Adewole said the disease is less tropical and deadly.

He said what is particularly significant about the outbreak is that many of the cases reported do not fit into the classic prototype of monkeypox but the government is still trying to confirm this assertion.

”We will know within 48 hours if what we are dealing with is monkeypox.  One of our scientists, Christian Appeh is looking into it in the laboratory to confirm if it is truly monkeypox. We are also doing a double confirmation in Senegal because Senegal also has a public health lab that does diagnosis.”

He, however, urged Nigerians not to panic and ensure that they maintain good hygiene as much as possible.