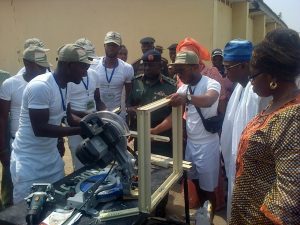 By Yemi Adedeji, Abuja
The  National Youth Service Corps  (NYSC) has revealed  plans to expand its Skills Acquisition and Entrepreneurship Development (SAED)  with the creation of six new mega skills centres  in the six geo-political zones in the country
Sulaiman Kazaure‎,  Director General of NYSC, made the disclosure at the maiden edition of the NYSC SAED festival in Abuja.
He said the centres  in the South-West  (Ekiti) and North East  (Gombe) States are already at completion stages.
Kazaure added that construction work has commenced in the South-South centre located at Ezi, in Delta state.
According to him, “we are also currently making efforts to advance the gains of the SAED programme through establishment of mega skills centres in the six-geo-political zones of the country.
“I am pleased to inform you that the ones for the South-West and North-East are at completion stage in Ekiti and Gombe states, “When completed, the centres will make the post-camp training of corps members more functional,” he noted.
Kazaure explained that over 900,000 corps members were sentisized at the end of the 2017 Batch ‘A’ Orientation Course, while over 7,000 already have established businesses in their individual area of choices
However, he commended supports from private bodies towards the execution of the project while also calling for supports from other private sector operators in the development of centres in other geo-political zones.