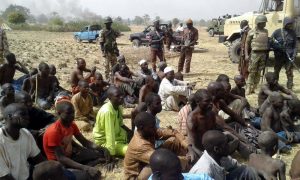 The National Orientation Agency (NOA) and the Nigerian Army are partnering to deradicalise repentant insurgents in the North-East and implement counter-narratives to discourage insurgency.

Garba Abari, Director General of NOA made this known in a statement by  Paul Odenyi, the Head Press Unit of  the agency and made available to newsmen in Abuja today.

Abari said that the agency and the army were strengthening existing partnerships toward enhancing civil-military relations and fast-tracking deradicalisation in the North-East.

He said that NOA would provide sensitisation and counter-narrative materials, especially in Borno and Gombe States , through the Operations Lafiya Dole and Safe Corridor of the Nigerian Army.

Abari said that it was only natural for the Nigerian Army with presence in 32 out of the 36 states and FCT to partner with NOA with presence in all states, the FCT and 774 local governments.

The NOA boss then called for a two-pronged approach to de-radicalisation, emphasising inputs from both the armed forces, the traditional and religious leaders.

He commended the army for establishing a Civil Rights Desk and living up to expectations in transiting from existing stereotypes in line with international best practices.

He further praised the armed forces for degrading Boko Haram and ensuring Nigerians in the North-East could now sleep with both eyes closed.

Speaking earlier, Kumapaye said the Directorate was created to drive the non-kinetic aspects of warfare and ensure the rights of civilians were respected in military operations.

He said that the Nigerian Army had secured the toll-free Short Code: 193 with which the public could now use to reach the army, using any mobile network and promised prompt response on any issue.

He said that the army planned to implement the same initiative in the South-East following the proscription of the Indigenous People of Biafra (IPOB) and required NOA’s active involvement in the planned programme.