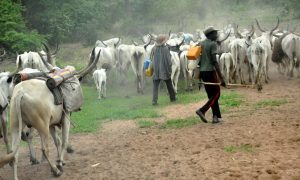 The Miyetti Allah Kautal Hore Socio-Cultural Association has accused the Benue State Governor, Samuel Ortom of legitimising cattle rustling with the establishment of six detention centres ahead of  November 1, 2017 when the implementation of the anti-grazing law will take effect in the State.

Addressing a press conference in Abuja,Abdulahi Bello‎ Bodejo, President of the Association, and Saleh Alhassan, National Secretary, ‎said that it remained totally opposed to anti-grazing law, saying it was intended to destroy the means of economic livelihoods of its members.

The State Governor had last week called for the arrest of the leaders of Miyetti Allah for allegedly instigating violence in the state.‎

The group said it viewed the recent governor’s outburst as an attempt to use media to influence and pre-empt the outcome of the court processes challenging the negative law currently on going at the Federal High Court, Abuja.

It also challenged the Governor to make public the security documents in his possession of the alleged planned invasion ‎of Benue state by pastoralists.

‎ ‎Alhassan stated that, “the attention of the leadership and members of the Miyetti Allah Kautal Hore Socio-Cultural Association has been drawn to the recent incendiary media outburst by the Governor of Benue State, Samuel Ortom on our Association legal challenge to the oblivious and wicked ‘Anti-grazing law’ and the veil propaganda mounted by the governor and his agents on the leadership of the Miyetti Allah.”

He explained that the Association has been looking and consciously working with all relevant stakeholders in finding lasting solution to the herders/farmers conflict in Nigeria.

Consequently, Alhassan noted that as an organisation that is championing the economic rights of the pastoralists that its members are law abiding citizens of Nigeria and believe in the rule of law and the supremacy of the Nigerian constitution

The National Secretary added that, “we remain totally opposed to anti-grazing law because it is in intended to destroy our means of economic livelihoods, ill-timed and driven by hatred of our people,”

“We are aware of the intention of the Benue
State governor to create six detention centres undertaken a committee to legitimise cattle rustling that have been the major driver of the conflicts between farmers/herders in the Benue Valley confirming our earlier fears of the negative use of the anti-grazing law to dispose our people of their cattle .
‎
“We are challenging governor Ortom to produce his aid and ally the killer gangster nicknamed Gana who have been behind the serial killing of innocent people in Benue,” Alhassan stressed.

The Association appealed to President Muhammadu Buhari to direct relevant security agencies to closely monitored the activities and actions of Samuel Ortom against the Fulanis.
‎