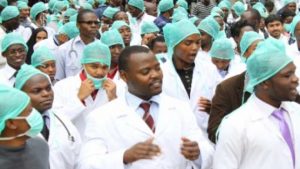 The Joint Health Sector Unions and Assembly of Healthcare Professionals, JOHESU, has suspended its nine-day-old strike.

The union made the decision following a nine-hour meeting with the federal government in Abuja on Saturday.

Biobelemoye Josiah, National Chairman of the union, said the strike had been suspended “in principle”, as a NEC meeting of the union will be held on Tuesday to take the final decision.

He said that the union has reached an agreement with the Federal government and workers are to resume back to work on Wednesday.

The union embarked on a nationwide strike on September 20 to protest among other issues, salaries adjustments, promotion arrears, and improved work environment for its members.

A terse press statement issued on Saturday evening by Samuel Olowokere , Deputy Director of Press at the Federal Ministry of Labour and Employment confirmed that the health workers have agreed to suspend the strike in principle.

“Following the eight hours extended conciliatory meeting at the instance of the Honourable Minister of Labour and Employment, the Joint Health Sector Unions (JOHESU) has agreed to hold an emergency National Executive Council (NEC) meeting to deliberate on agreements reached with the Federal Government with a view to call off its on-going strike action early next week”.

I frustrated secession agitations under my regime with state creations, says IBB