ADVERTISEMENT
By  Adams Ayomide
ON Saturday. October 20, 2018, the TourIbadan team, a group of tourists in Ibadan, Oyo State capital visited the ancient Irefin Palace and the highest hill point in Ibadan, Bower’s Tower.
Narrating the experience at Bower’s Tower, the team spokesman Ayodele Enyinade, narrated that , written on the wall of the building is “Bower’s Tower, erected December, 1936 in honor of Captain Ross L. Bower, First Resident and Traveling commissioner of Interior Yorubaland in the South Western Nigeria. (1893-1897).”
Captain Lister didn’t build the tower, he only unveiled it, the tourists were told.  Some speculations had it that the tower was built in honor of the commissioner’s contribution to the South Western region.
About 60-feet tall above the ground, the Tower located on Igbo Agala hill, Oke Aremo, along Yemetu-Alaadorin is the highest hilltop in the city.
“J.P. Clark would be proud I’m standing on one of the seven hills he described in his 1965 Ibadan poem,” said Adams Ayomide, one of the tourists.
At the zenith of the tower, one has the vantage view of Ibadan city and what can be described as sea of ‘brown roofs’ that defines the city’s sky line. 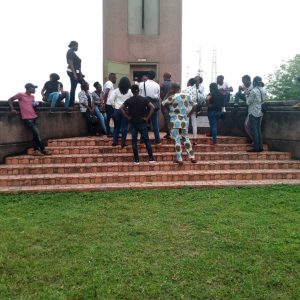 “When you climb the over 45 spiral steps inside the tower to the top, be sure to catch a bird’s view of most places in Ibadan! Dugbe, UI, Challenge, UCh, Sango and other places,” said Ayomide who said he had heard a lot about the Tower before visiting it.
Also, this tower is called “Layipo” by residents, it is assumed that this name gives credence to the fact that, when you climb it, you have to move around it in a circular form to catch good glimpse of places. It is also “Layipo” because of the spiral steps inside it.
However, the terrifying aspect of the tower is that two people can not climb the stairs at the same time as they are too narrow to accommodate more than one at once.
“The architect probably didn’t think about the future while constructing the steps as narrow as it is.”
Mr. Oni, the tower’s curator narrates that “The tower has become a tourist attraction to indigenes and non-indigenes over the years, as they come for picnic and sightseeing at the place.”
He added that “the tower which would mark 82 years of its unveiling in December is a symbolic reference in the history of Ibadan as it is the highest hill-point in the city.”
THE OLDEST PALACE IN IBADAN
The team also visited the oldest palace in Ibadan, The Irefin Palace presided upon by Chief(Baale) Irefin within the periods of 1912-1914.
Not until the 1930s, no king in Ibadan was referred to as “Olubadan” ( Lord of Ibadan). Hence, the king of Ibadan and lord of Irefin was called “Baale Irefin”.
Baale Irefin’s reign was short lived because he petitioned W.A. Ross (the Resident Chief, Oyo Province) about his high -handedness reporting him to the Governor-General. This case was however turned against the Baale and later led to his deposition.
The palace has 185 rooms, some; people occupy, while some are empty because of the ritual aesthetics attached to such rooms.
The architectural designs which are old-fashioned meets the taste of art today and are a great sight to behold.
Speaking about the emptiness of the rooms in the Palace, Fatai Ogundeji, the Mogaji (Head) of the compound explained that “No ordinary person can occupy the rooms in this age, as they have been fortified by certain rituals in the past. Unless, the rooms are neutralized, they would be empty forever.”
He added that “The palace is a sort of attraction to filmmakers as different groups have shot movies there over time, including the popular Tunde Kelani’s Saworoide.”

OPINION: Why Kaduna is on fire!