One of the Boko Haram fighters killed during the encounter

THE troops of 130 Battalion with the support of Army Super Camp Baga on Sunday had a fierce fierce encounter at the north west of Baga town with Boko Haram and ISWAP fighters during which 20 terrorists were killed.

In a statement issued by John Enenche, a Major General and Coordinator Defence Media Operations at the Defence Headquarters, the terrorists armed with mortars, rocket propelled grenades and small arms were heading to attack villages surrounding Baga, when the troops attacked their convoy with overwhelming fire power. 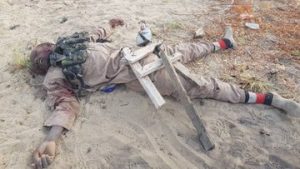 During the gun duel, Enenche said nine  soldiers were wounded in action with no loss of life.

“They were evacuated to Sector 3 hospital for treatment,” he added.
According to him, Tukur Buratai, Lieutenant General and the Chief of Army Staff commended the gallant troops for their professionalism and directs them to remain resolute towards eradicating the criminals from the North East.