In Ibadan, celebration of Yemoja, goddess of the river came alive

by Elendu Reports
in Entertainment, Featured
0

AFRICAN traditional institutions have established their principles and ethos into various cultural societies since the inception of man, the presiding engineer of the latter.

The traditional institutions have informed certain phenomena, leadership structure and cultural preservation which has ensured continuity in different facets of the society.

On Saturday 2nd of November, we arrived at the grand finale of one of these African institutions where the goddess of the river, Yemoja is celebrated.

The Yemoja festival is an annual event hosted at Popo Yemoja area of Ibadan, Nigeria by Yemoja devotees. The festival which begins with the Ila’su (cutting of new yam) on the opening day is celebrated for seventeen days. The last two days of the festival are established as the grand finale with each day dedicated to different purposes.

Tracing the background of Yemoja, a compound name derived from Iye Moja (Mother of Fish). One of the devotees present at the festival, Onifade narrates that in ancient time, Yemoja was known as Moja Elewi. This is because Ewi of Ado Kingdom had adopted her as a child. Moja Elewi loves traveling, admiring the beauties of nature and exploring her immediate surroundings.

One day, she embarks on a journey into the forest and encounters a strange man. When the strange man queries her mission in the forest, she responds that she had only come to explore the conditions of her environment. The strange man, who introduces himself as Okere of Saki ( King of Saki Kingdom) admires the beauty of Moja Elewi and proposes a romantic affair which would lead to marriage with her.

Moja Elewi remarks that if Okere truly wants her hands in marriage then he must meet her father, Elewi Ado to seek proper approval rites. Coincidentally, Elewi Ado and Okere were friends and this simplifies the marriage process.

Eventually, both parties become couple and set different rules for each other. These rules is to ensure that they do not offend each other’s principles in their matrimony.

First of all, Moja Elewi draws her husband’s attention to her body. An amazing wonder about Moja’s body is that one of her breasts is longer than the other, it grows from the normal part to end on her knee region. Therefore, she warns Okere never to abuse her with this part of the body. Also, she requests that Okere grant his slaves freedom and he adhered.

In his own rules, Okere informs her that he has a special room in his house where no woman must step her feet and should never dare to. Also, he forbid her from touching one of his warrior’s garment. She listened attentively and promised never to step into the power house nor touch the garment with her hands.

While living in Okere’s kingdom, Moja Elewi exhibits her creativity through tie and dye and also impart the skills in several ladies living in the Kingdom. In recognition of her impart, she was conferred a leadership title and also given a special staff known as ‘Opa Lado’.

On a fateful day, Okere resumes his hunting expedition. Far away in the forest, the weather changes and it is quite obvious that rain would fall. Okere becomes worried as he had left his power garment outside, this garment must not be touched by water. With metaphysical powers, he detoured.

In his home, the weather send signals of rain while Yemoja springs into action thinking of possible ways to save her husband’s garment which neither a woman must touch nor rain should beat.

She picks up a long stick and remove the garment with it. Carefully, she proceeds to Okere’s power room and dropped the garment by raising the stick above the door. Through an opening at the top of this door, Moja Elewi navigates the garment with stick into the room.

When Okere arrives at his home, he meets Moja Elewi still standing at his room’s door. Without asking Moja or anyone present at the scene how she managed to save the garment and her plight at the door. Angrily, he insults his wife with her long breast believing that she had stepped into his power room.

Moja buries her head in pain and disappointment while Okere lashes her with heavy words in the presence of neighbors and other wives.

Humiliated by Okere’s sudden action and break of trust, the marriage ended and she exits Okere’s house with her tie & dye’s pot. When Okere finds out about the real truth about Moja Elewi and how she saved his power garment from his other wives, he quickly launch out in search of her.

When Moja got to a point, she bent her pot, entered into it and transformed into the flowing river known as Odo Ogun (River Ogun) located around the Oke Ogun area of Oyo state today.

According to cultural beliefs, anyone who is conferred as Okere of Saki is forbidden from looking into the River Ogun as this has adverse consequences.

The Festival of Yemoja 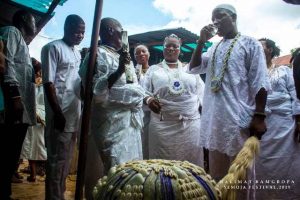 The veneration of Yemoja, goddess of the river is an annual event massively celebrated at Popo Yemoja compound, Ibadan, Oyo state, Nigeria. Concurrently, the goddess is also celebrated in different parts of the world as it is being done at Popo. The festival is a seventeen days event which had commenced since October and concluded last Sunday, 3rd of November, 2019.

The date of the festival is not fixed, it varies with the oracle’s decision every year.

The festival begins with Ila’su (cutting of new yam) while the following days are dedicated to the worship of different gods such as Sango, Osun, Yemoja, Loogun among many others.

After the first fifteen days, activities in the last two days tagged as grand finale intensify the spiritual essence and aesthetics of the festival. The sixteenth day is marked as the Aisun Odun ( Variety Night) where different cultural activities are displayed amidst traditional songs, chants, dances, flamboyant costumes and so on. Meanwhile, during the day, Baba Yemoja and some of his acolytes engage in specific processions to some places in the community to appease different gods. At the shrine, Sango, Ifa, Obatala and Osun devotees arrive in two and threes to pay homage at Yemoja shrine. It is established that several of these pantheons and devotees are interconnected. Hence, one may not do without the other.

Finally, the seventeenth day wraps up the festival with activities beginning from the Yemoja shrine. In the wake of event, some chiefs including Iya Yemoja, Baba Yemoja Abore Ejigbo, Fadunsin Iyaoju Abonron, and other priests will gather at the entrance of Yemoja shrine. The Igba Aje ( Calabash of Wealth) placed on a mortar and other objects of sacrifice including porridge, pidgeon, yams, sweets, goats and biscuits are positioned on the ground.

With the atmosphere becoming tensed, Abore Ejigbo and Iya Yemoja lead in a sacrifice and prayer session simultaneously. After the prayers, the host of chiefs who are dressed in white from head to toe continue singing with drumming interrupting in the background. After this session, the Arugba (Bearer of Yemoja’s Calabash) emerges with four other females of different ages. The Arugba is selected by the gods and must be a woman who is no longer in the child bearing business. In contrast to the Osun festival, she is older while the other is required to be a virgin.

Adimula places Igba Yemoja (Yemoja’s Calabash) on the Arugba, he lifts Igba Aje and put it on another woman’s head and other objects of sacrifices as well placed on two other females. Some children who about two to three in numbers also follow suit as they carry different sacrificial gifts on their heads. As for the children, the sacrifices they bear are specially dedicated to them and people in their age groups that they also prayed for. 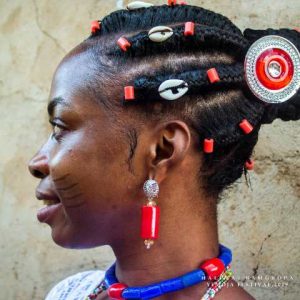 The procession then takes off from the shrine with the crowd of devotees, tourists, indigenes and non-indigenes following the Arugba and others as they head to Yemoja river located close to Molete area, Ibadan. The tempo of drumming is heightened as songs and chants rent the air.

When they arrive at the river, the Arugba and other carriers are eased off their loads while Baba Yemoja walks into the middle of the river to complete the festival and ritual procession. After a completed ritual process, he steps out of the water and everyone swings into another session of celebration towards the Yemoja shrine.

In the final phase, the Ogun Leki (a symbol/idol of Yemoja) is placed on the head of Arugba Yemoja as all devotees and festival participants proceed in a celebratory mood to the Olubadan of Ibadan palace for the king’s blessings and prayers.

After departure from the king’s palace, Ogun Leki which stands firmly on the Arugba’s head is carried around the community as Baba Yemoja and other chiefs offer prayers to the land. Finally, the Arugba brings Ogun Leki to the shrine and they draw curtain on the festival for the year.