By Ayomide Adams
FROM the city of Ibadan to Ado Awaye- a town in Oke-Ogun area of Oyo State , Tour Ibadan- a tourism community of young individuals enthusiastic about the future of tourism in Nigeria and beyond explored the mystery hills of Ado Awaye- home to the second hanging lake in the world.
The other hanging lake being the one at Colorado State in  United States of America.
Unlike its peer in the State of Colorado that has registered as a tourists destinations decades ago, Nigeria’s hanging lake is still little known beyond Oyo State. Colorado hanging lake was named a National Natural Landmark in 2011. Since then it has become a popular Colorado tourist destination with over 100,000 visitors per year. 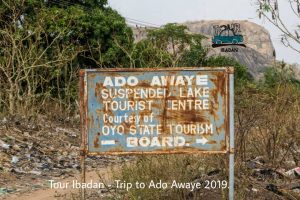 It was for this reason that Tour Ibadan embarked on a breath taking journey to the summit of rock where Iyake Lake is located in Ado-Awaye with over 50 tourists on Saturday, February 2, 2019. It was its third trip since inception in October 2018. 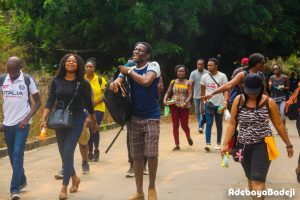 It might not have received the kind of attention it deserves as a tourists destination, Iyake Lake has steadily been turning crowds to the small town of Ado-Awaye. From the slopes, to the hills surrounding the town located in the outskirts of Iseyin -another popular town in Oke-Ogun- the terrain is a sight to behold.
When asked about how to locate Ado Awaye from Ibadan, Tobi James, the tour photographer said ” The journey might take two hours or lesser, depending on your mode of transportation, if you intend to drive yourself over there, follow Moniya- Ijaye road, the route leads you straight to Iseyin. When you arrive at Oja-Oba in Iseyin, take the bend beside the mosque and keep moving till you sight the gigantic Ado Awaye hill, after Iwawon community.”
Apart from the Iyake Lake, which is the major attraction on the Ado Awaye hill, there are also other wonders existing on the hill.
According to locals in the environment, the lake is bottomless and has swallowed many a people who attempted to measure its depth. Reverend Awujoola, a resident pastor narrated that “Once, it was reported that some people tried to discover the depth of this lake, a charm was threw into it, but surprisingly was recovered somewhere far away from the town.”
It takes about an hour to reach the peak of the rock where the lake rests. The water in the lake has maintained the same greenish colour and same level several years. No one knows the depth  and it’s obvious not much has been done to offer any scientific explanation as to the origin of the lake. A staircase of about 365 steps starts the journey to the mountain before tourists are left to do hiking where the steps end to get to their destination. 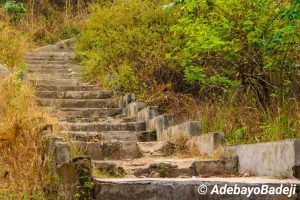 Adetoro Fatima, Tour Ibadan welfare officer narrated that “hiking the hill of Ado Awaye with the several man-made steps is not easy.”
“After climbing the first half of the steps, we are welcomed to the hill by this big rock, they called it Ishage rock- It is a large rock in an oval shape, balanced and standing upright on one of its small edges.” 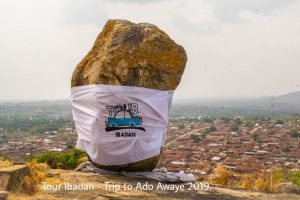 Locals said the the rock has maintained its mystery state to the people of Ado Awaye as it refused to fall or change from its current position.
“When you leave the Ishage rock behind and continue your journey to see the Iyake Lake, you will climb some steps ahead, pass through a little bush path, then find yourself walking the rocky hill till you arrive at the hanging lake. Just close to the Iyake Lake is a small hole covered with sticks, the hole is referred to as “Agbomofunyake” (One that gives a child to Iyake). “Whoever puts his legs into this hole will find himself drowning in the lake” the tour guide admitted.
Ese Awon Agba ( the footprints of the elders) is also a defining attraction of the Ado Awaye hill- they are large footprints that are visible in some parts of the hills. It is believed that the ancestors once lived on this hill and the footprints belong to them. 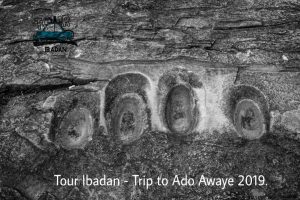 If you find yourself admiring the footprint of the elders, don’t miss the opportunity to catch a pleasing eye-sight of the elephant tree, a little distance away from the hanging lake. It is actually a natural design of a tree that takes the shape of an elephant during formation- tourists sit at the back of this tree to take pictures too.
And if you think yourself as a bold and courageous tourist, you might want to dare the path called “Ese Kan Iku” (a path of death)- this is a wide yet sloppy area of the hill that separates one part from the other.
In essence, to tour is to see life and values differently, Ado Awaye is a community rich in cultural values and traditions.
The hanging lake and other attractions on the hill if well harnessed can usher in development and other positive potentials into the community and Oyo State at large.
If government at federal and state levels enable a proper management of this tourist site, it would serve as a source of revenue and also, provide employment opportunity as workers would be deployed to this site too.

OPINION: ECOWAS at 45 and the dream of its founding fathers