When will our airports stop embarrassing us?

Anytime Nigeria is portrayed negatively by the western media, some of us — die-hard pro-Nigeria citizens who are unrepentant Nigerians by birth and blood — feel our pride has been injured.

We don’t always want to hear or read about the ills of our country being told or spread by foreigners, not because we support those ills — not at all, far from condoning bad behavior or indiscipline — but we know the effects of such negative portrayal on all of us.

But one is always constraint by the limit to which Nigeria can be defended and many times promoted when the indices are pointing the other way.

When in November 2017 Portharcourt and Murtala Mohammed airports were rated among the 20 worst airports in the world, some of us felt our image was being unduly maligned by the Sleep in Airport website that carried out the survey. Those who know what obtains at these airports and others could not be bothered by such rating – the airports never measured up to the international standards.

In that survey, Lagos was ranked the fifth worst airport in the world while Port Harcourt was placed the third worst globally. The two are within the world’s worst five.

The website explained that the airports that appeared on the list of worst airports in the world were those that had the capacity to truly offend travelers.

“Within these terminals, there appears to be a general disinterest in a positive traveller experience. In some cases, passengers are made to stand or sit on the floor as they await their flights. In others, the bathrooms don’t have water, toilet paper, or any semblance of cleanliness,” sleepinairpport.net, which is recognized globally, said.

“In some cases, the physical structure of the airport is fine, but the personnel are the problem. Got a problem? Don’t expect much in terms of customer service at these airports.

“If you find yourself travelling through one of these 20 terminals, brace yourself. You’ll want to give yourself just enough time to get in and get out. A minute more and you’ll be unhappy and uncomfortable – a minute less and you risk missing your flight,”

The indices are clear and our airports can be judged through this lens view, even by Nigerians.

This happened just exactly one month after MMA was rated fifth worst airport in the world — nothing has changed and is not likely going to change, although there are ministers who oversee the sector and billions of tax payers’ money has been spent to upgrade the airports.

It was a Thursday morning, December 14, 2017. I was rushing to catch an 8 O’clock flight to Abuja from a hotel in Ikeja GRA, Lagos, after attending a three-day training.

Lulu Bangkok of ITV, Ruth Olurounbi, Tola Bademosi both of the Nigerian Tribune plus two other colleagues and I entered the departure lounge of Terminal 1 of MMA.

Despite all the millions claimed to have been spent to renovate the airport, the departure lounge, in terms of space and other accessories, is still below standard. A true reflection of what was considered in the ranking.

But that’s not my real headache. As soon as I passed my stuff through the scanner and I was cleared to enter the departure lounge, a scene caught my attention immediately — a terribly scary experience. There, to the left corner of the scanner, was an Indian couple struggling to revive their baby who was having convulsion. The baby was jerking on the floor, his eyes were dilating.

While a woman I first thought was the mother but later turned out to be a good ‘Samaritan’ was massaging the boy’s hands, the father was doing same to his legs, the real mother was just as confused as the rest of us. Other passengers minded their own business – I don’t blame them, though.

Where are the medics here? I asked almost out of reflex when it looked the boy wouldn’t come back despite efforts by this ‘good lady’ and the father, and ironically, his twin brother was playing around quite unaware of the fate befalling his brother.

At this point, I had expected some level of emergency response from the airport officials. There was none, except for what was a casual call by one of the Airforce personnel who said “please call the medicals”. She left her duty post briefly to where the boy was lying and almost immediately she returned without any real concern for the little boy.
Read this also: Boko Haram kills four UN aid workers going to deliver food to IDPs

More than 10 minutes after she made this call, there was neither a first aid box in sight nor any medical personnel. In fact, no airport official came close to this dying boy.

Someone among us standing said facing the father, “please take this boy to a hospital”. There and then, the boy, having been stabilized a bit, was lifted by his father on his shoulder. The man exited the departure lounge.

Though I didn’t know where he went and what happened thereafter because it was almost the boarding time for me and others. I hoped the boy survived.

But this is not a good image for Nigeria despite the huge money the government claimed to have spent on the airport. In 2015, Aviation budget was N12.2billion, N36.07billion in 2016 and N70.4billion still running for 2017. 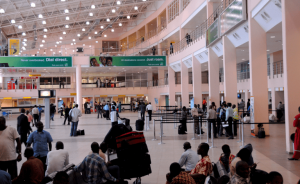 That was not all that happened at the airport just within 30 minutes. Like one of the songs of late Fela Anikulapo Kuti, the Abami Eda himself, ‘e no finishing, no finishing, no finishing’. When the announcement was made for the boarding of Arik plane W3722 to Abuja, Ruth Olurounbi, Business Correspondent with the Nigerian Tribune, couldn’t find her hand luggage.

She was sitting at the lounge just adjacent my seat with her colleague from the same office, Tola Bademosi with her bag under the seat. “Who picked it, where did you keep it,” were the questions we asked a visibly troubled Ruth. No answer and the bag was nowhere. Thus, she boarded the Abuja bound airplane without suitcase which she said contained her clothes and other personal items.

This was also almost a month that Fisayo Soyombo, Editor of the International Centre for Investigative Reporting (ICIR) lost his Nikkon Camera to checked-luggage thieves at Nnamdi Azikwe International Aiport, Abuja while returning from Johannesburg via Addis Ababa aboard Ethiopia Airline.

“Theft of travellers’ belongings is common at Nigerian airports; the airlines know about it, and NAHCO officials are a big part of it,” one airport official had told Fisayo after he discovered that his camera was missing. “Once they see it in the scanner that there are valuables in your checked-in luggage, they find a way to pilfer it. However, if you mount serious pressure on them, they will bring out your property.”

So could it be that someone saw what was inside Ruth’s bag among those manning the scanner? Could it be that one of them had come for the bag later? But she would be told that ‘she was on her own’ by an official she complained to. Grudgingly and very upset too, Ruth boarded the plane to Abuja without her bag.

One thing is clear, Nigerian airports are increasingly becoming unsafe and embarrassing to all of us. Despite the huge amount – N707billion spent to renovate and expand MMA in 2016, it is doubtful if the airport is equipped with Closed Circuit Cameras (CCTV). If there are CCTVs, they are definitely not working like what you have within and around Abuja.

One wonders if the ‘thieving culture’ at Nigerian airports is spreading; Olose Michael, Retail Sales Executive with one of the companies in Nigeria’s downstream sector, had to create a scene early this week at the Abuja airport when his mobile phone disappeared under the scanner.

“I had missed the fly and I was passing my stuff through the scanner,” he said. “I just observed my phone was missing just after I passed it through the scanner,” said Michael who by now had started making trouble before an official said he was the one who picked it when he didn’t see or know who the owner was.

According to him, a senior airport personnel apologized on behalf of the kleptomaniac officer, claiming he was new on the job. What’s obvious; this nauseating thieving by Nigerians at the airports is perpetrated by the so-called airport workers. So there are no CCTV cameras at the airports?

With touting by same officials at the airport, poor state of facilities and pilfering of passengers’ luggage, many Nigerian airports will, for a long time to come, be source of embarrassment to us while the Federal Government keeps budgeting huge sums for airports without corresponding effects.

Remunerations were generally poor in the country, but that of journalists is unique-Osinbajo

Buhari at 75: Why God kept him alive

Buhari at 75: Why God kept him alive