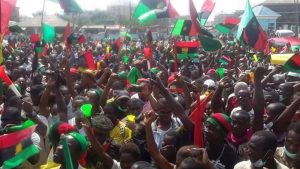 Despite its proscription as a terrorists’ organization, the Indigenous People of Biafra (IPOB), has insisted that the November 18, 2017 governorship election in Anambra State will not hold.

Emma Powerful, IPOB Publicity Secretary, said the group has ordered its members and other freedom fighters in the area to boycott the election on the voting day noting that Biafra is unstoppable.

Speaking in a statement issued on Sunday, Powerful said the election is a test case for IPOB and its allies in Biafra territory and that boycotting it would send a statement to the international community about the seriousness of the agitation for Biafra.

He maintained that IPOB must teach corrupt Igbo politicians that money cannot buy IPOB as they are special breed untainted by the corrupt tendencies of Nigerian politics.

“Every genuine Biafran desiring of freedom for Biafra from this Islamic bondage of Hausa Fulani caliphate called Nigeria, must not only stay at home on that day, but must also make sure those around them do not vote. November 18, 2017 is a date with history,” he said.

“If we Biafrans succeed in demonstrating before international observers that we are serious about our freedom by locking down Anambra State on that day, the world will be in no doubt that Biafra is unstoppable.

“Locking down Anambra State will pave the way for IPOB to announce a date for substantive referendum later next year with or without the approval of Nigeria.

“Events in Catalonia and Kurdistan have pointed the way forward for we Biafrans because it was clearly demonstrated by both nations that we can call for and conduct our referendum with or without the cooperation of Nigeria.

“Election boycott is the only legitimate tool left in the hands of we oppressed people to register our displeasure with the ongoing genocide in our land, arbitrary arrests, torture and reign of saboteurs in government houses across Biafraland. If we vote, Nigeria will never again take Biafra agitation serious.”

He said the whole world is watching to see how serious IPOB towards the realisation of Biafra noting that the successful boycott of the November 18 election will prove to the entire world the determination of the group towards having new nation where all men will be equal before the law.

“For the sake of our leader Mazi Nnamdi Kanu who was abducted and presumably murdered by the Hausa-Fulani rulers of Nigeria and their co-conspirators in Igboland, especially Igbo governors and Ohaneze leadership, we must as a people boycott the elections.” He said

“The Nigerian government, Igbo governors and certain sections of Ohaneze Ndigbo leadership have been pouring billions of Naira into a well prepared media propaganda to try and tarnish the clean image of IPOB and that of our leader with no success.

“Every lie and fabrication have been cleverly deployed by these conspirators through their well-paid and compromised media houses to sell fear and anarchy to the people of Anambra State. The truth remains that corrupt Igbo politicians want to destroy IPOB by all means because they know we represent the people and will never take money from Abuja to compromise the struggle as they have all done.

“They were the people that begged Buratai to bring his Islamic army into our land to kill our brothers and sisters because they value the crumbs they are getting from Abuja over our well-being as a people”.