Iwatutu Joyce speaking at the training.

The UNFPA YPP, in partnership with a Non-Governmental Organisation, Value Female Network (VFN) had selected female students of secondary schools and tertiary institutions in Osun state who have Android phones and also use social media for the 2-day training which was held at Aurora Conference Centre in Osogbo between November 1 and 2, 2019.

The participants who were drawn from 20 communities in Osun were taken through theoretical and practical trainings on how to make use of FGM Apps and the social media to advocate against the deadly practice and also sensitize stakeholders in their communities to abandon the practice of cutting girls.

Iwatutu Joyce Adewole who is a UNFPA YSMA took the 200 girls on communication; drafting advocacy messages and how to write short articles on social media. She also trained them on the importance of using social media to share impact stories to connect with their peers to end Female Genital Mutilation.

Kamaldeen Adesina who is also a UNFPA YSMA representing Osun State took a session to train the girls on how to use hashtags and the best way to reach their target audience for advocacy against Female Genital Mutilation.

Iwatutu Joyce who has led communication team for advocacy at different fora charged the participants to use communication and media to be change agents in their communities through digital platforms and social media to engage decision-makers and educate people on FGM. 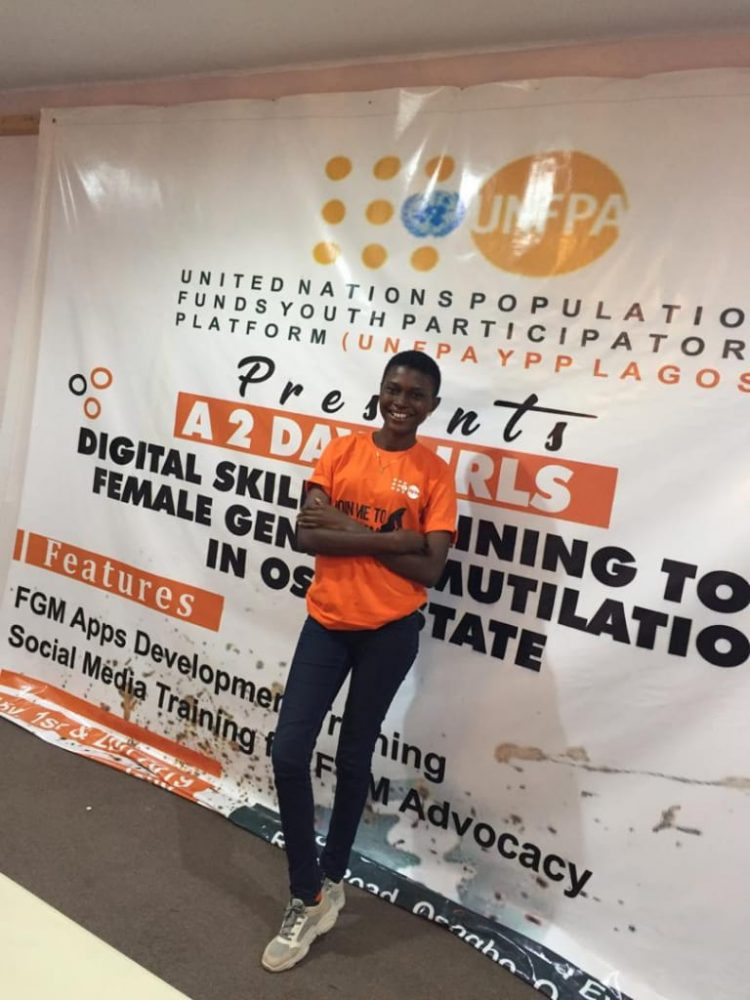 Social media is one of the best ways to reach out to more young people and educate them on harmful traditional practices like female genital mutilation, she added.

The Lagos State Coordinator of UNFPA YPP,  Elizabeth Talatu, while addressing the participants on the need to abandon the practice of FGM, stressed the need for community leaders to get involved in efforts at ending FGM.

Also addressing the participants, a member of UNFPA YPP, Blessing Ashi explained that FGM is harming girls and leaves them traumatized without health benefits. She called for its eradication and urged health workers and female cutters to desist from the act.

According to Ashi, the training would help build the digital capacity of the pupils in order to create behavioral change among their peers and adults through the use of the various social media platforms.

She expressed optimism that the training would fast track a rapid reduction of FGM prevalence in Osun State.

Speaking, Costly Aderibigbe, a member of UNFPA YPP and the Executive Director of VFN that hosted the training, said there was the need to employ the use of digital platforms to combat the spread of FGM to get the desired results.

She said that exposing the pupils to information on FGM and the mastery of the usage of the several digital tools would go a long way to address the scourge.

“We decided to come to Osun to train these over 200 female students because Osun State is one of the states with the highest prevalence in Nigeria,” Aderibigbe said.

“We want to build an army of girls who would use their digital skills to help eradicate the scourge.

“The world is now a global village and we want them to use the skills acquired from here to reach out to their peers, talk to people in their communities with the usage of digital skills. You can imagine the rate at which the message will be spread. We are also looking at their generations ending FGM.

“It is better if the young people are talking about ending FGM because it is affecting them the more. They have information to rescue others and raise alarm when there is any suspected case.”

One of the participants who spoke with journalists after the training, Mary Babatunde, said she would be more active on social media with a view to creating advocacy against the deadly practice.

Aisha Oladapo, another participant, urged government and security agencies to ensure immediate arrest and prosecution of anyone found indulging in FGM.

The participants resolved to do everything within their reach to ensure that FGM is abandoned through social media advocacy.

UNFPA YSMA supported the girls with communication materials to draft out advocacy messages. UNFPA YPP also provided the participants with vests, FGM Apps and other materials that would aid their efforts in advocating FGM.