THE face-off between the leadership of Nigeria Labour Congress (NLC) and Minister of Labour and Employment, Chris Ngige on Wednesday took a bloody turn as suspected thugs ambushed members of the Congress who were protesting to picket the residence of the minister in Asokoro area of Abuja over his refusal to inaugurate the Nigeria Social Insurance Trust Fund (NSITF) board.

The attack on the protesting NLC members took place in the morning at the Justice Muhammad Nasir street located in Asokoro area of the FCT.

The labour leaders and their members had earlier barricaded the minister’s residence with two tankers which were parked at about 5am to block the entrance.

The NLC president,  Ayuba Wabba alongside his NUPENG counterpart,  Eniredonana Akporeha Williams who led the protesters, alleged that the thugs were mobilized to maliciously handle any labour member found within the area of the minister’s residence. 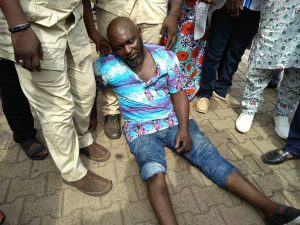 The thugs who were fully armed with planks and stones exchanged blows with some union members, just as some of the protesting workers sustained varying degree of injuries.

“Why are you fighting us? Why are you stoning us?” Wabba and other labour union members who were denied access and chased away from the ministers’ residence queried the thugs.

Our reporter also noted that those who sustained injuries were immediately rushed to the hospital for immediate treatment while a journalist lost his camera, just as another got his car windscreen smashed during the incident.