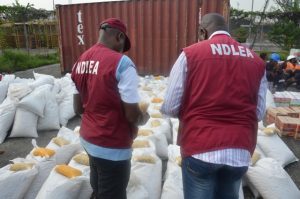 Three operatives of the National Drug Law Enforcement Agency (NDLEA) have been shot dead by gunmen in Okene.

The three operatives were gunned down while on patrol around the main gate of the Federal College of Education, Okene , Idris Bello, Commandant of the NDLEA in Kogi, told reporters on Sunday in Lokoja.

He said that they were killed at about 8:30 p.m. on October by the gunmen, “who emerged from nowhere’’.

Bello said that the gunmen came on foot and opened fire at the operatives alongside three other colleagues who escaped unhurt.

He identified the operatives killed as Nicholas Onwumere, Ebun Peters and Abdulrahman Musa. .

Bello disclosed that the gunmen made away with the rifles of the dead officers adding that other security agencies in the state had been contacted on the development, saying that efforts were being made to track down the killers.

The Kogi Government had in August established a Forward Operation Base in Okene in partnership with the Nigerian Army to check kidnapping, armed robbery and other violent crimes.