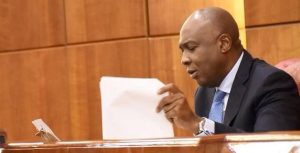 The Nigerian Senate has said it would probe how the Paris Club refunds and other bailout funds doled out to state governors by President Muhammadu Buhari were approved.

Samuel Anyanwu, Senator representing Imo East, who sought the leave of the Senate to move a motion on the matter during Thursday’s plenary, queried the legality of the funds given to governors by President Buhari.

Bukola Saraki, President of the Senate who presided over the session, sought and got the leave of his colleagues and approved that the proper motion be brought by Anyanwu, to the floor on another legislative day.

In a letter read at Thursday’s plenary, by  Saraki, Buhari said the Medium-Term ‘Expenditure Framework (MTEF) and Fiscal Strategy paper were prepared against the backdrop of a generally adverse global economic uncertainty as well as fiscal Challenges and recovery in the domestic economy.

Buhari explained that this was to ensure that planned spending “is set at prudent and sustainable levels and is consistent with government’s overall developmental objectives and inclusive growth.”

It will be recalled that the Federal executive council in August had approved the 2018-2020 medium term expenditure framework MTEF and the fiscal strategy paper FSP.

The MTEF is annual, rolling three year-expenditure planning that sets out the medium-term expenditure priorities and hard budget constraints against which sectoral plans can be developed and refined towards providing the basis for annual budget planning.