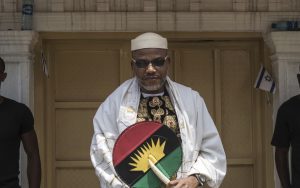 The principle of the right to self-determination gained currency during the of the World War II, when it was included in the Atlantic Charter, signed on 14th August, 1941, by President Franklin Dwight Roosevelt of the United States of America and Winston Churchill, Prime Minister of the United Kingdom, who pledged the Eight Principles of the Charter.

It was subsequently included in the Universal Declaration of Human Rights as one of the binding authoritative cardinal principles of international law regarded as jus cogens.

(1) Everyone has the right to a nationality.

The right to Self-Determination in international law is divided into two categories, namely:

The right to ‘Internal Self-Determination’ has to do with agitating for rights that are being denied within the context of the State itself without necessarily breaking away from the parent state.

The proscribed Indigenous People of Biafra (IPOB) and other groups such as MASSOB have premised their agitation for the breakaway of Biafra from the Nigerian Federation on the principles of Self-Determination.

CONDITIONS FOR SELF-DETERMINATION UNDER INTERNATIONAL LAW

The right to self-determination in International Law can only be sustained, justified or exercised on the basis of the following:

Whether the people affected or the people agitating for rights of self-determination are being disenfranchised in their parent State. That is, they are being denied the right to vote and be voted for?

Whether the people affected or the people agitating for the right of self-determination cannot aspire to the highest level of government of the State?

Whether the State has a consistent or sustained deliberate policy of grossly violating their fundamental human rights?

That the State has a consistent or sustained policy of persecuting these people agitating for the rights of self-determination.

When the conditions listed in a – e above are being denied a group of people in a State, such people after having tried unsuccessfully to assert the rights within the domestic context of the State (Internal Self-Determination), may exercise it externally. In this context, if such group of people e.g. the IPOB should seek international assistance, they may get it.

It is clear that the principles enunciated above when juxtaposed with the demands of the proscribed IPOB and MASSOB, the Biafra question become otiose and baseless.

It goes without saying that none the conditions which international law has laid down for people seeking for self-determination avails those demanding for Biafra.

The Federal Government has not denied the Igbo people the right to aspire to the highest level of Nigerian Government. No Nigerian of Igbo origin has been denied the right to contest for the Nigerian Presidency. Presently, we have 6 (Six) Ministers in the Council of Ministers of the Federation who are Igbo.

There is no consistent or sustained deliberate policy of grossly violating the fundamental human rights of Igbo People.

The Federal Government or Nigerian State has no consistent or sustained policy of persecuting people agitating for the rights of self-determination.

The Igbo Language is even one of the three Nigerian languages recognized by the Nigerian Constitution for the conduct of official business in the National Assembly.

In this context too, international law grants every sovereign State the right to use all means in defending and preventing the disintegration of its territorial integrity and political independence.

The principles of self-determination are well espoused in the case of Quebec Vs Canada determined by the Supreme Court of Canada. The Canadian Supreme Court addressed the three questions in order. First, they stated that under the Canadian Constitution (and with Quebec being a party to it since its inception), unilateral secession was not legal. However, should a referendum decide in favour of independence, the rest of Canada “would have no basis to deny the right of the government of Quebec to pursue secession” Negotiations would have to follow to define the terms under which Quebec would gain independence, should it maintain that goal. In this section of the judgment they stated that the Constitution is made up of written and unwritten principles (based on text, historical context, and previous constitutional jurisprudence) and that there are four fundamental tenets of the Canadian constitution. Those 4 interrelated and equally important principles or values are:

Federalism – the principle that seeks to “reconcile diversity with unity” by giving federal authority over to only those issues of common interest amongst culturally diverse and politically independent provinces. The purpose of Canada’s federalism is not only to create a loose association amongst provinces, but a true National Unity.

Democracy – the principle that seeks to promote participation in effective representative self-government, which respects and responds to all voices in a marketplace of ideas.

Constitutionalism and the Rule of Law – the principles that protect citizens from state actions by forcing governments to act under the rule of law, the constitution of Canada being the supreme law. The constitution’s entrenched protections of minorities ensures that the country does not operate simply on majority rule, and enables a true democracy in which minority voices are fairly considered.

Protection of Minorities – the principle that guides the other principles, but one which is also independent and fundamental because of its uniqueness to Canada relative to other federal, constitutional democracies.

They held that these pieces cannot be viewed independently but all interact as part of the Constitutional framework of Canada.

RIGHTS TO SECEDE UNDER INTERNATIONAL LAW AND SELF-DETERMINATION:

The answer to the second question, which concerned Quebec’s right under International Law to secede, gave the opinion that the International Law on Secession was not applicable to the situation of Quebec. The Court pointed out that International Law “does not specifically grant component parts of sovereign states the legal right to secede unilaterally from their ‘parent’ state.”

The Supreme Court of Canada’s opinion stated that the right of a people to Self-Determination was expected to be exercised within the framework of existing states, by negotiation, for example. Such a right could only be exercised unilaterally under certain circumstances, under current International Law. The Court held that:

‘The various international documents that support the existence of a people’s right to self-determination also contain parallel statements supportive of the conclusion that the exercise of such a right must be sufficiently limited to prevent threats to an existing State’s territorial integrity or the stability of relations between Sovereign States. A State whose government represents the whole of the people or peoples resident within its territory, on a basis of equality and without discrimination, and respects the principles of self-determination in its own internal arrangements, is entitled to the protection under International Law of its territorial integrity.’

The Court stated in its opinion that under International Law, the right to secede was meant for peoples under a colonial rule or foreign occupation. Otherwise, so long as a person has the meaningful exercise of its right to self-determination within an existing nation state, there is no right to secede unilaterally.

For close to 40 of the last 50 years, the Prime Minister of Canada has been a Quebecer. During this period, Quebecers have held from time to time all the most important positions in the Federal Cabinet. During the 8 years prior to June 1997, the Prime Minister and the Leader of the Official Opposition in the House of Commons were both Quebecers. At present, the Right Honourable Chief Justice and two other members of the Court, the Chief of Staff of the Canadian Armed Forces and the Canadian Ambassador to the United States, not to mention the Deputy Secretary-General of the United Nations, are all Quebecers. The international achievements of Quebecers in most fields of human endeavour are too numerous to list. Since the dynamism of the Quebec People has been directed toward the business sector, it has been clearly successful in Quebec, the rest of Canada and abroad.

The Supreme Court further stated that: Quebec could not, despite a clear Referendum Result, purport to invoke a right of self-determination to dictate the terms of a proposed secession to the other parties to the Federation. The democratic vote, by however strong a majority, would have no legal effect on its own and could not push aside the principles of Federalism and the Rule of Law, the rights of individuals and minorities, or the operation of democracy in the other Provinces or in Canada as a whole.

It goes without saying that, in view of the principles or conditions  that international law has laid down ; juxtapose with the demands of the proscribed IPOB for the holding of a referendum on Biafra on the ground of a purported exercise of the right to self-determination, is spurious, untenable and there patently unmeritorious.