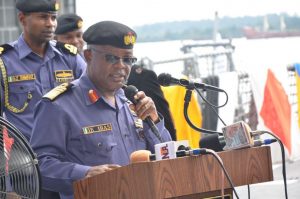 The Nigerian Navy Ship (NNS) Jubilee Ikot Abasi, Akwa Ibom State, has handed over a fake soldier in possession of illegally-refined petrol and a Nigerian Army identity card to the Nigeria Security and Civil Defence Corps for prosecution.

The 42-year-old suspect, Ishaya Vandi, was arrested by a combined patrol team of the Navy Operation Thunder on a routine patrol along the Port Harcourt/Ogoni/IkotAbasi road.

Vandi, who hails from Adamawa State, admitted to the crime, and said he bought the vehicle he used for his operations on hire purchase for N3million.

He explained that he had been involved in the business for over a month, and bought the seized product in Port Harcourt and was heading for Abak in Akwa Ibom State when he was arrested.

He said, “I invested about N267, 000 in the business. I got into the business in order to survive. I used to sell recharge cards before I entered the business.”

Saidu Garba, a Commodore and the Commander of the NNS Jubilee, who was represented by Murktala Yunusa, a Lt. Comdr. said the handing over of the suspect to the NSCDC was constitutional.

“The Nigerian Navy recognises the jurisdiction and constitutional role of the Nigeria Security and Civil Defence Corps. In view of the foregoing, I am directed to request you to take over the suspect for further investigation and possible prosecution. I am to further request that you keep the Base informed on the outcome.

“In continuation of the battle against illegalities, it is my humble wish to ensure and see that we rid the society of any form of illegality. There is zero tolerance for illegality on our waterways and land,” he said.

While receiving the suspect on behalf of the state commandant of the NSCDC, the trial officer of the NSCDC in Ikot Abasi, Mr. Abel Ojimba, commended the efforts of the navy to check vandalism and sea robbery.

He said, “We wish to applaud the efforts of the Nigerian Navy in the area of tackling sea robbery and vandalism.

“I stand here on behalf of the state commandant of the NSCDC to assure the Nigerian Navy that we will always do the needful in making sure that due process is followed in the court of law.”