FOLLOWING reported refusal of lawmakers returning from abroad to the country to be tested at the airports for coronavirus, the presidency has asked the leadership of the National Assembly to compel its members to make themselves available for test and isolation.

In a letter written by the Chief of Staff to the President, Abba Kyari to the Speaker of House of Representatives, Femi Gbajabiamila, the presidency noted that the airports are the first primary line of defence noting that refusal by anyone to be tested is a threat to the country.

“Accordingly, you are kindly requested to direct all members of the House of Representatives who returned to Nigeria from foreign trips to report themselves to the nearest NCDC test centre with immediate effect,” Kyari wrote. 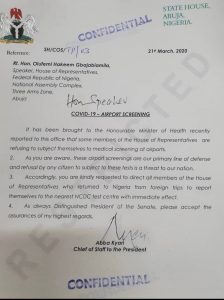 President Biden At Inauguration: We Will Get Through This Together