POLITICS: Is Buhari afraid of Kwankwaso?

ADVERTISEMENT
ADEYEMI ADEDEJI writes on the intrigues and efforts of the ruling All Progressive Congress (APC) to frustrate Senator Rabiu Musa Kwankwaso to declare his intention to vie for the office of the president in Abuja recently.
In the run off to 2015 general elections, the name on the lips of many Nigerians ‎was Muhammadu Buhari, a ‘reformed democrat’ and a sort of messiah that Nigerians were waiting for.
The slogan was ‘change’, the reason was not far fetched, the then ruling party, the Peoples Democratic Party (PDP) had made  a god of itself. The administration led by former president Goodluck Jonathan ‎had been enmeshed with corruption to the extent that the former president had to say on national television that what Nigerians were referring to as corruption were mere ‘stealing’. He shot himself on the leg. The statement alone was one of the many undoings of Jonathan in the run off to the election. Nigerians were desperate for a change of government, it became a case of Any Option But (AOB) Jonathan.
The then opposition party, the All Progressive‎ Congress (APC) smartly played on the emotions of Nigerians. The party came with a change agenda, to fight corruption that was already walking on the streets, the party promised Nigerians heaven on earth, it wasn’t difficult for them to convince Nigerians to vote for them as a continuity of PDP the government was seen as a suicidal. It became a smooth ride for General Muhammadu Buhari and the APC. Besides, Buhari was also the consensus candidate of the north, he had no one to challenge him or put his cult like follower in the north to a test.
Fast forward to 2018, the popularity of the ruling party appears to be waned. The party’s politics of rhetorics  is no longer selling. Almost all the electioneering campaign promises have been broken, all promises were also cancelled. Corruption in the current administration remains a nightmare. Mr. Integrity posture of President Muhammadu Buhari is now a mirage. The ruling party now appears desperate to win the  forthcoming election.
However, the main opposition party, the PDP appears to be getting its mojo back. Unlike APC, it as been able to put its house in order. Hence, the number and the qualities of its presidential aspirants. 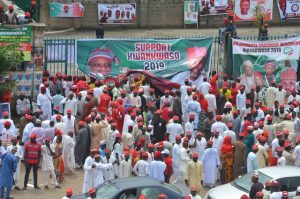 ‘Sagay should bottle up, he has consistently embarrassed FG'

‘Sagay should bottle up, he has consistently embarrassed FG'