Police Not Looking for Me says Obla 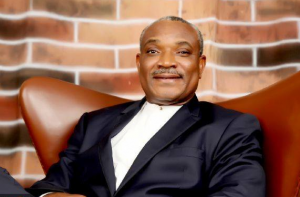 Okoi Obono Obla , Special Adviser on Prosecution to President Muhammadu Buhari, has described as mischief a publication that he has been declared wanted by the Nigeria Police.

In a statement in Abuja, Obla said, “I have been inundated, since the early hours of today, by calls from family members, friends, well wishers, and colleagues concerning a publication in an online newspaper, Elombah.com.

“The said publication claims I have been declared “wanted” by the Police. Elombah.com also published a letter purportedly written to me on June 28th, 2017 and signed by DCP Umar Mamman Sanda.

“Let me state categorically that I received no such letter from the Police or anyone inviting me for interrogation.” He said

In a telephone chat with Elendureportsonline.com, Chief Obla said, “I am right here in my office. Someone I had an interaction with on twitter, who did not like my position on an issue is the one I suspect to be behind this. It is pure nonsense.”

Elendureportsonline.com called a telephone number on the supposed invitation letter from Police to Chief Obla. The person who spoke to us said, “We don’t conduct investigations on the phone and I’m not in a position to answer your questions. You have to talk to our PRO.”

Asked if he would confirm the veracity of the said letter, the man who was identified as Sunny Sue by truecaller said, “If you want information come to our office. I cannot talk with you.”

In an obvious swipe at the publishers of the story, Obla’s statement stated: “In the political clime we are, mischief makers would spare no efforts to smear people, especially public officers, they perceive as their enemies. The Nigerian media should not aid these mischief makers.”