According to PR Nigeria, the arrested suspects were Kunle Ogunleye (a.k.a.: Arrow), a native of Kwara State, and Micheal Adikwu, a native of Apa Local Government Area, Benue State.

The development comes three weeks after the police circulated pictures of four suspects who were captured by closed-circuit camera of the banks that they attacked. At least five banks were raided during the April 5 incident. Seventeen people, including nine police officers, were confirmed killed by the police.

Ogunleye, 35, was arrested on Sunday in Oro, Kwara State.

Adikwu was reportedly dismissed as a police corporal following his arrest in 2012 on alleged criminal offences. He was charged to court in Kwara State for compromising police operations and releasing armed robbery suspects. 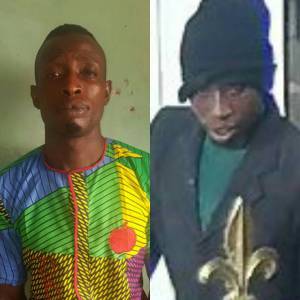 He was arrested by the police intelligence response team (IRT) in Kwara State two weeks ago, about a week after the police declared him wanted and circulated his picture to the public.

“All suspects arrested among others have confessed” their roles in the Offa carnage,” PRNigeria said. “They are assisting the IRT teams in arresting more of the bank robbers as the police continue the investigation.”

15 years after pull out, Zimbabwe re-applies to join Commonwealth