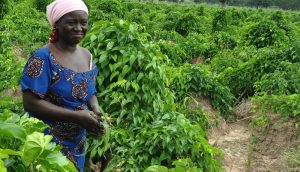 ‎Despite commitments by countries and donors to shore up the agricultural sector and to focus support on women farmers, Oxfam has lamented that international donors and governments have failed women farmers due to underfunded policies to mitigate climate change.

‎An analysis conducted by Oxfam on policies and public investments in six countries showed that women farmers are not getting the resources they need to feed their families and adapt to climate change.

The findings was coming in a year of rising hunger, fueled by conflicts and super-charged weather events, coupled with brutal drought in East Africa that has pushed millions to the brink of famine, and hurricane in the Caribbean and United States.

‎The report according to Oxfam exposes a sham in the rhetoric and commitments by countries and donors.

The analysis beamed search light on agricultural policies and public investments in Ethiopia, Ghana, Nigeria, Pakistan, the Philippines, and Tanzania, and showed that countries investigated were all struggling to get enough climate adaptation funding.

It revealed that very little money was channeled towards supporting small-scale farmers and helping them become more resilient to climate change; stressing that it’s almost impossible to know how much is really reaching women farmers, a group especially threatened by climate change.

According to the analysis, “in Pakistan, just 26 percent of the $1.17 billion in climate finance they received in 2014 went to adaptation. Worse still, as of this May, Nigeria has received only $15 million for adaptation—a sliver of what others have had. As of last year, multilateral adaptation funding for small-scale farmers totaled just $345 million, far short of the many billions that estimates show developing countries will need.

“To make matters worse, Oxfam found that governments do almost nothing to make sure women farmers benefit from these insufficient amounts of climate and agriculture funding. For example, in Nigeria, climate adaptation policies simply “encourage” women to participate in initiatives, but go no further,” the report said.

The analysis shows that in Nigeria, volatility of prices, weather/climate change, conflict, have made access to food particularly harmful for vulnerable people, which has led to hunger and malnutrition.

‎Abdulazeez Musa, Head of Influencing and Public Engagement, Oxfam in Nigeria , said the need for transformation in food security can’t be more urgent.

“And yet, Nigeria has no shortage of policies in place that could theoretically support small scale farmers. For example, The country’s Vision 20:20 about the economic diversification away from the oil sector; the national agricultural policy with plenty of services to farmers; the Anchor Borrowers program with great linkage to market; the National Agricultural Resilience Framework (NARF) with services for risk management in agriculture, all these policies are commendable”, Musa said.

He stated;”‎women on the front lines of climate change can’t continue to struggle on while waiting for money to trickle down to them. Investing directly in women farmers not only helps them and their families, it bolsters the food security for entire communities.”

Oxfam however called on donors, governments to meet the goals of the Paris Agreement and step up their funding aimed at helping communities adapt to climate change.

“Developing countries must increase funding specifically for women farmers. African countries must also honor the Maputo Declaration that commits 10 percent of all government spending to go on agriculture development.These commitments offer huge benefits. Discriminatory attitudes and policies mean women farmers produce about 20 to 30 percent less than men – closing this gap would lift millions out of hunger and poverty.”

“Poverty discriminates against women, and it is policies and attitudes of countries such as these that reveal why that happens. If governments don’t adopt policies that clearly target women farmers, then they will be forgotten and left at the mercy of climate disasters they did nothing to cause,” Mistry noted.