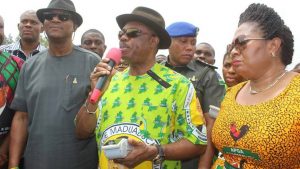 Opposition governorship candidates in the November 18 election in Anambra State have expressed concerned over pulling down of the billboards and campaign posters in the state.

Thirty 37 candidates are contesting the governorship election in the state.

Our correspondent who moved round some parts of Awka, the state capital confirmed that only the billboards of the incumbent Governor Willie Obiano and candidate of the All Progressive Grand Alliance (APGA) were sighted at strategic locations in the capital city.

Oseloka Obaze, the governorship candidate of the Peoples Democratic Party (PDP) told our reporter on Thursday in Awka that he was reliably informed that Obiano instructed the Anambra State Signage and Advertising Agency (ANSAA) to pull down billboards belonging to political opponents.

“It was painful that after paying the required fee to ANSAA, the state government still directed them to pull down our billboards in Awka, Onitsha and other locations’’, Obaze said.

He said that his supporters had reports of numerous destruction of PDP billboards and his campaign posters by the officials of state signage agency who move around in official vehicles with the inscription `Willie is working’’ and accompany by security personnel to damage these materials.

“On Sept. 27 I paid the agency with receipt No: 0003951 and in spite the proof of payment, government choose to damage the billboards they collected money from me’’. He said

He however called on the National Broadcasting Corporation to investigate this problem before it degenerates to other issues.

Chira Obiora, the Director-General of the Campaign Organisation, and  Godwin Ezeemo, the  candidate of Progressive People’s Alliance (PPA) also confirmed that PPA’s candidate was experiencing the same problem.

“We have been recording this problem of our billboards being destroyed by government officials in spite collecting monies from us and the problem is getting more intense as we close in on the Nov ember 18 election date”, he said.

Emeka Ibe, the state chairman of All Progressives Congress (APC) also corroborated the claims of the PPA and PDP, saying that APC was equally experiencing the same problem.

He said that all their billboards and posters pasted after payment of required fee by the signage agency were pulled down.

Ibe said that the leadership of the party in the state had instructed their supporters to shun violence in spite high level provocation from government officials and APGA members.

It was gathered that fee for erecting of billboard was N9million before it was reduced to N6 million  by the agency in-charge of signage and advertisement in the state.

Jude Emecheta,Managing Director of Anambra State Signage and Advertisement Agency, said the reason for the poster fee was for the clean-up of defaced environment after the elections.

Emenecheta, said it was false that ANSAA workers were behind destruction of billboards and posters of other political parties contesting the Nov.18 election.

“Our outdoor Advertising workers that are officially saddled with the duties of pulling down any billboard that is indebted to the agency.

“In order not to be seen to be supporting the government in power, we reduced the signage fee from 9 million naira to 1 million in each zone’’, he said.

Emenecheta noted that the PDP candidate only paid part payment, but had gone ahead to erect its billboards and posters everywhere in the state.

He explained that Obiano has no influence on the operations of the body adding that it was unreasonable for anybody to make such allusion.

Emencheta assured that the agency would remain impartial and challenged anyone with proof of witching to come up with complaints.