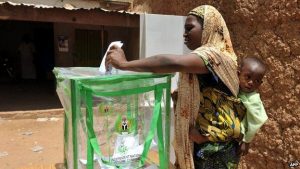 The National Council of Women Societies (NCWS), says Nigerian women would vote only for gender-friendly political parties in the 2019 elections.

Gloria Shoda, President of NCWS who stated this at a pre-summit news conference held in Abuja, said that the news conference was part of activities ahead of the Nigeria Political Stakeholders Summit to be organised by NCWS next week.

“The summit which theme is: ‘Increasing Women Participation in Politics and Democratic Governance in Nigeria,’ will seek to address the continued marginalisation and poor representation of women,” she said.

Shoda said that the council demands for a better representation of women in the Nigeria democratic space are as follows:

“Politicians and political parties that seek the votes of women in the upcoming elections should begin their commitment through women empowerment.

“Women will be mobilised to vote only for parties that have made concrete effort to allow women occupy strategic positions in their party structure, elective offices and political appointment.

“We are asking that all elective office holders and political office holders should as a matter of urgency restructure their cabinets to allow for increased women representation.

“All political parties, relevant government agencies and international donors should partner with the Council to raise a Trust Fund to support women interested in contesting for elective office in forthcoming elections,’’ she said.

Shoda said the NCWS also called on all past and present female political office holders and elected representatives to encourage female aspirants irrespective of their political parties by providing professional mentorship, endorsement and mobilisation.

She said that NCWS in conjunction with Reclaim Godly Values Foundation and other relevant agencies would create an advocacy, information and advice center across the country to provide civic education to enlighten women on their rights as it relates to voter education.

Shoda said that the outcome of 2015 general elections in Nigeria and the appointments that followed into top government positions showed a sharp decline in the performance of women in the electoral process.

“This is very troubling given the general swell and campaign for popular participation by women that preceded the election.

“Indeed the decline in the number of elected female politicians represented a significant manifestation of female political disempowerment,’’ she said.

Shoda said that since the return of democracy, the national average of women’s political participation in Nigeria has remained at 6.7 per cent in elective and appointed positions.

The President said that of the 36 ministerial appointments by the present administration, only six are women, representing 16.7 per cent.

She said that in the National Assembly, women constitute 5.6 per cent of members of the House of Representatives and 6.5 per cent of the Senate.

This, Shoda said was clearly unacceptable and called for the need for an urgent improvement in women participation in electoral processes.