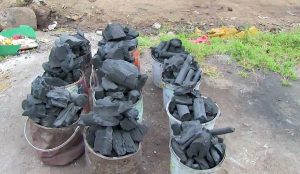 ‎The National Council on Environment (NCE) has called on the federal government to immediately ban the ‎exportation of charcoal in Nigeria.

It also  the development and promotion of alternative clean source of energy.

The Council said the call became necessary because the current forest cover of Nigeria is less than 4% as against the expected 25%.

The Council made the call in a communique issued on Thursday at the ‎end of the 11th NCE was held at Abeokuta, Ogun State, chaired by  Ibrahim Jibril, Minister of State for Environment, with the theme; “Unlocking the Investment Opportunities in the Environment Sector Towards Nigeria’s Economic Recovery, Diversification, Growth and Sustainable Development‎.”

It stated that the federal government should put in place policies and other measures to promote provision and utilisation of Solar Energy and energy efficient cook stove.

The Council also resolved that the Ministry of Environment should step up actions toward synergy with relevant MDAs through Memoranda of Understanding (MoUs) in order to resolve serious challenges of overlap, conflict and duplication of regulatory roles‎‎.
‎
‎It noted that, “the current forest cover of Nigeria is less than 4% as against the expected 25%, therefore the exportation of charcoal in Nigeria should be banned and alternative clean source of energy should be developed and promoted.”‎

The Council noted that there should be synergy between the Federal and State governments in the implementation of climate change programmes especially on capacity building and access to global climate finance.

It also recommended that State Governments should provide security for federal Ministry of Environment projects under implementation in their States to prevent vandalisation and also fulfil their obligations as agreed.

The Council stated: “having deliberated extensively on all the memoranda and noted the emerging environmental issues, climate smart actions and the need to update all relevant environmental regulations as well as immediate commencement of the implementation of the Strategic Environmental Assessment (SEA) for all policies, plans and programmes in Nigeria. ”

“The Federal Ministry of Environment should domesticate Minamata Convention on Mercury and other Multilateral Environmental Agreements (MEAs) ratified by Nigeria.

“That the Federal Ministry of Environment and States should establish reliable electronic based data bank on Pollution Control and Waste Management issues in the country.

“That Flood Early Warning Systems (FEWS) in flood prone areas should be installed by Federal, States and Local Governments to save lives and property during flooding

“State should be encouraged to put in place Waste-to- Wealth programmes/initiatives that can attract private sector participation and foreign direct investment in order to unlock investment opportunities in the waste management sub- sector.

“That States that have indicated interest to key into the NEWMAP Programme should put aside minimum counterpart fund of N500 million, provide 12.90% of total cost of the project as well as provide base line data of erosion sites in their States.

Don't come back, we won't die without you, PDP tells Obasanjo

Don't come back, we won't die without you, PDP tells Obasanjo