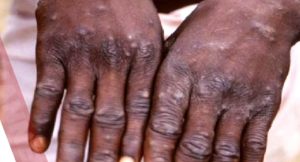 Danail Iya, Nasarawa State Commissioner for Health has disclosed that one suspected case of monkeypox had been recorded in the state.
Speaking with newsmen in Lafia on Friday the commissioner said that the blood sample of the suspect had been sent to the Central Public Laboratory in Yaba, Lagos.

He noted that the state government was waiting for the result.

Iya said that the state government had step up efforts to educate the public on ways to prevent the disease.

According to him, the ministry has partnered with traditional and religious leaders to educate people, mostly rural areas, because they are more likely to have contacts with monkeys.

“We will equip the Dalhatu Araf Specialist, Lafia and the Federal Medical Centre, Keffi with drugs and other facilities to tackle any case of monkeypox,” he said.

The commissioner urged members of the public to report any strange illness to the nearest medical facility for prompt action.
He reinstated the state commitment in eradicating the scourge.