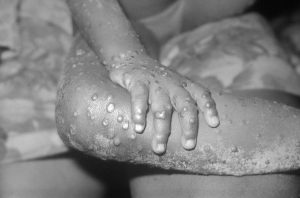 The Nigeria Centre for Disease Control said on Monday that a disease suspected to be monkeypox has been reported in six more states, after the first case of the pox emerged in Bayelsa State late last month.

Chikwe Ihekweazu, Chief Executive of the Center said there have been no deaths recorded as a result of the outbreak noting that it is unlikely that many of the cases are monkeypox.

“So far, there have been no deaths recorded. It is unlikely that many of the suspected cases are actually monkeypox, but all are being investigated.” He said

He said samples had been collected for laboratory confirmation and results are yet to return.

All 31 cases are hospitalized in respective states and said to be “improving clinically. While there is no treatment for monkeypox, supportive care and management helps patients recover, since the virus is self -limiting.

An emergency operations centre has been activated to coordinate investigation and response to the outbreak across all seven states. But a notification for “preparedness” has been issued for the entire country.

The first case of monkeypox in Bayelsa has been traced to a monkey, but the biology of the virus allows it to be transmitted from human to human once it gets into human populations, Ihekweazu said in a Daily Trust video.

Its symptoms—including fever, headache, body pain, malaise, swollen glands, sore throat, skin rash lasting up to four weeks— are similar to those of small pox but “much less severe and with a low fatality rate,” he added.

Transmission of the virus is through contact with infected animal, human, or contaminated materials.

Animal-to-human transmission occurs through bite or scratch from animals and bush meat preparation. It can also be transmitted from one person to another.

Control measures include isolation of suspected or confirmed cases, strict adherence to universal precautions, especially frequent handwashing with soap and water, and use of personal protective equipment, NCDC has advised.

“Nigerians are once advised to remain calm, avoid self-medication and report any suspected case to the nearest health facility. Public health authorities across the country have been well informed on what to do when a suspected case arises,” said Ihekweazu.

CBN directs banks to pay N20,000 over the counter to customers daily