The elections are now to be held on February 23 and March 9, 2019, INEC Chairman, Mahmood Yakubu announced in a press briefing held midnight Saturday, February 16.

Mahmood cited logistics challenges as reasons for shifting the polls.

Before the announcement, INEC Chairman and his commissioners were locked in a marathon meeting Friday evening at a time many states were expecting election sensitive materials fueling speculations that the elections might be postponed.

The postponement has however been greeted by mixed reactions as opposition parties have described it as part of grand plans  by the presidency to rig the polls. 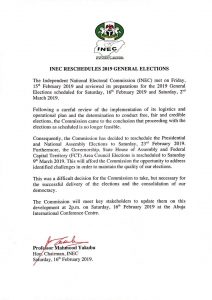