Lawyers in Nigeria’s Federal Capital Territory have reported to the courts despite an order by the Nigerian Bar Association (NBA) for them to boycott the courts.

Also, the Adamawa State branch of the association also called on its members to ignore the boycott order and go about their normal businesses.

The NBA had called for the boycott at the end of its emergency National Executive Council meeting on Monday, which discussed the suspension of Walter Onnoghen as the Chief Justice of Nigeria.

Onnoghen was suspended in controversial circumstances by President Muhammadu Buhari on Friday.

The suspension is deemed illegal and has drawn strong condemnations. The NBA ordered court boycott in protest, amid concerns over the violation of the independence of the judiciary.

Many courts at the federal high court were filled with lawyers waiting for sessions to begin. 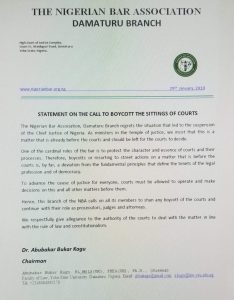 In a statement issued by Abubakar Bukar Kagau, Chairman of NBA, Adamawa Chapter and sighted by our reporter, the association said boycott or going to street on a matter that is before the court is a deviation from the fundamental principles that define the tenets of legal profession and democracy.

It argued that the court must be allowed to operate and make decisions on the matter and other matters before it in order to advance the course of justice for everyone.

Jide Fashikun: The morning after