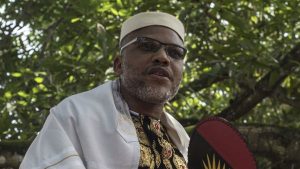 Ramas Asuzu, the Patron of Biafra War Veterans, has said that the agitation for self-rule by Nnamdi Kanu, leader of the proscribed Indigenous People of Biafra (IPOB) is another step for Igbo children to be massacred.

He said Kanu’s drive for agitation for freedom and secession through hate speeches would not work and was an invitation to violence.

“There were no due consultations and Ndigbo failed to come to the round table for exhaustive deliberations on burning issues before taking actions,” Azuzu told journalists at the weekend in Anambra State.

“I warned against the agitation because it was another step in Igbo nation for our children to be massacred.” He stated.

He attributed the emergence of Kanu as the leader of IPOB to a perceived leadership vacuum in Igboland.

According to him, the marginalization of Ndigbo was as a result of the defeat of Igbos in the Nigeria/Biafra War even as he described the agitations of IPOB, as a fruitless venture, adding that Igbos are the architects of their misfortune.

Asuzu also called on President Muhammadu Buhari to implement the recommendations of the 2014 National Constitutional Conference Report, adding that he never associated himself with Nnamdi Kanu’s agitation for Biafra sovereignty.

He noted that IPOB was moving smoothly until Kanu came to the scene and hijacked it, for selfish purpose and because it appears that Igbos like noise making.