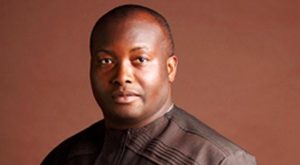 This is not the best of times for the Authority newspapers as it has disengaged its production staff that embarked on strike over accumulated unpaid salaries.

ELENDU REPORTS ONLINE gathered that the production team of the newspaper outfit owned by Ifeanyi Ubah, oil magnate down tools over non-payment of their salaries accruing to about 12 months.

One of the aggrieved staff who spoke to our correspondent on the condition of anonymity said that the workers have had to work till odd hours on daily basis, and struggle to survive as they find it difficult to cater for their basic needs.

‘’On several occasion, we have called the attention of the management to attend to our plights, just as they do so much to get the paper to print on daily basis, but they pay deaf ears to our plights.

“Our children are out of school, we cannot pay our rent, we cannot feed, we cannot even transport ourselves to office until we borrow transport from neighbours and friends, a place we stay up late to keep alive for over two years,’’ he said.

The visibly angry staffs have vowed that they would explore all avenues including going to Human Right Commission, the Public Defender’s Office and the Legal Aide Council to protest the degrading and dehumanising conditions Ifeanyi Ubah and his management team have put them through.

It was also gathered that the current industrial dispute would not have escalated had the management kept to the terms of an agreement earlier reached with the workers.

The production team had downed tools a week ago and was deceived by the management who claimed that payment had been made into their individual accounts only to resume work and be confronted by Madu Onuorah, the Managing Director/Editor-in-Chief, who informed them that the company was expecting money to defray their debt.

¨Can you imagine each time we ask for money from the office, they keep telling you there is no money in the company, but, on daily basis the company gets not less than five pages of classified adverts which is not less than N500,000.

‘’It is sad that we are treated this way, we work till late in the night as we  cannot go home till the paper goes to bed.

¨The income realised in the Authority Newspapers on weekly basis can defray whatever is being owed the entire production team but Ifeanyi Ubah and his team out of sheer wickedness do not consider the welfare of the people responsible for the day to day running of the paper,¨ the aggrieved staff added.