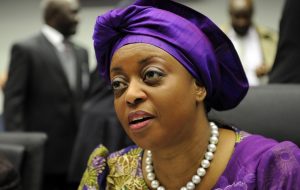 Abubakar Malami , Minister of Justice and Attorney-General of the Federation, says the Federal Government will bring Diezani Alison-Madueke. a former Minister of Petroleum Resources back to the country to face corruption charges when necessary.

He said this on Wednesday in Abuja during an interview granted to some Hausa service State House Correspondents.

His statement was in response to reports that the former petroleum minister was asking the Federal High Court in Lagos to order the Attorney-General to bring her back to Nigeria from the United Kingdom.

Malami said her extradition was not necessary since the UK government was already investigating her and taking appropriate measures on the matter.

“The truth of the matter is that steps have been taken by the United Kingdom authorities on issues bothering on corrupt practices involving Nigerians,” he said.

“If Nigeria feels strongly that there is need to bring Mrs Diezani Allison-Madueke here to face charges of corruption, government will not hesitate to do that.”

Read excerpts from the interview below;

Former Minister of Petroleum, Mrs Diezani Allison-Madueke, wants FG to bring her back to face (corruption) charges and the government is not saying anything. So, what is happening?

The truth of the matter is that the government is doing something, especially on issues of corruption and litigation in Nigeria and outside the country.

Considering the fact that there is an existing understanding between Nigeria and other countries, especially the United Kingdom on the recovery of stolen funds, so you cannot say government is not doing anything.

So are you going to ask them to release her to come for trial?

The truth of the matter is that steps have been taken by the United Kingdom authorities on issues bothering on corrupt practices involving Nigerians. If Nigeria feels strongly that there is need to bring Mrs Diezani Allison-Madueke here to face charges of corruption, government will not hesitate to do that.

Is she going to get a fair hearing here?

Well, the issue is not about fair hearing now; we are talking about investigation first and is not within Mrs Diezani Allison-Madueke’s power to ask the Federal Government to bring her to testify in any case in Nigeria.

Mrs Diezani Allison-Madueke is facing charges of money laundering and acquisition of properties in the United Kingdom, so it is important to face the charges there than for her to come as a mere witness in a case in Nigeria.

Kachikwu: My memo to Buhari was to improve efficiency and transparency