How far can Wike, Fayose go as new PDP kingmakers?

After 2015 elections, series of significant changes took place – there was (is) recession, which sent many millionaires under and produced new set of money bags. That’s what change is – no permanent champion but current champion.

Like the recession, the defeat suffered by the Peoples Democratic Party (PDP)  during the 2015 elections also thrown up new set of kingmakers from what is left of the party.  There are only two of them – they decide who gets what and who is schemed out as the case may be.

One has the resources and the other has gift of the gabs or rather loquacious – Nyesom Wike, Governor of Rivers State and Ayodele Fayose, Governor of Ekiti State, have worked and have assumed the position of kingmakers of the rejuvenated PDP. For now, they are the ‘Dynamic duo’.

If you are in doubt, ask Alimodu Sheriff. He joined PDP in 2014 and by some manipulations in 2016; he became the Chairman of National Working Committee of the party and at one time the acting National Chairman. No thanks to arms deal scam – those who could lay claim to the remains of the party were haunted by EFCC investigations.

Those who followed PDP would still recall how Wike and Fayose spearheaded the return of Sheriff and ultimately crowned him with that position.  But they both superintended his removal when, according to them, his continuous stay as the national chairman of the party would jeopardise the party. “Ali must go,” because “his leadership was destabilising the party,” Wike said.

“I supported Senator Ali Modu Sheriff in good conscience. But when it became obvious that his continuous stay in office as the National Chairman will jeopardise the collective interest of the party, I had no option than to support his removal,” Fayose said healthy male viagra for cheap vitamin c graduation lyrics after the 2016 national convention of the party held in Portharcourt. 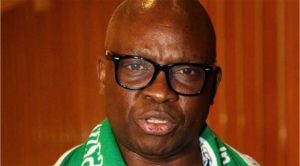 They did the magic; expended all that was needed to see him out of the party and installed Ahmed Makarfi as the Chairman of the party’s National Caretaker Committee, the position Sheriff was made to vacate through court injunction.

That was indeed the beginning of their emergence as the two musketeers and the new PDP kingmakers but many within the party including Bode George, former Deputy National Chairman of the party underestimated their strength.

Both Fayose and Wike have a lot in common and they perfectly fit each other. While Fayose is the unofficial face of the opposition party since the build up to the 2015 elections and up till date, Wike on the other hand is the much needed engine room of the party especially that he is about the strongest governor the party can boast of at the moment- he provides the finances. 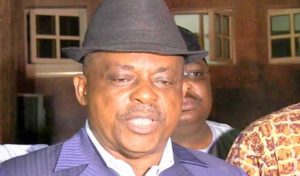 In politics, loyalty is a scarce commodity; no one is loyal to anyone or better put, there is no permanent loyalty. Politicians go to where their interests are protected. Therefore, it was mere display of political naivety that Bode George, Tunde Adeniran, Rashidi Ladoja and others from the South West could think that Fayose could possibly be on their side. No way, he was on the other side.

Fayose is always smarter- he knew South West could not and would not clinch the position, because the convention was already held before that Saturday. He and Wike, have decided who will be the party’s chairman.

While George and others, though without such financial muscle to make delegates do their bidding in a game defined by money, were banking on the zoning arrangement they claimed had ceded the national chairmanship of the party to the South West, Fayose and his partner had perfectly positioned Uche Secondus, who is from South South for the seat. Secondus had always wanted that position before now.

By a fiat sort of, Wike before the convention came out clear about where the pendulum was swinging. He said Secondus, a former acting chairman of the party, was the best candidate to lead the PDP in view of his experience and track record.

“I am talking because I am in the campaign team of Prince Uche Secondus and I am a delegate.

“Secondus has never said anything negative against any other candidate. He has remained focused on his campaign. Somebody who believes that he will win will not resort to writing petitions before the convention.” He was quoted as said.

And this is why Bode George was better and perhaps still bitter. Wike was quoted as saying that “National Chairmanship in the South-west will not change the fortunes of the PDP.”

According to him, the fortunes of the party did not improve in terms of votes in that zone, even when the President hailed from the South-west.

“The zone is prone to incessant crises as can be seen. Any candidate who emerges from the South-west will lead to further crisis from other factions from that zone.

“Only a candidate from outside the South-west such as Prince Uche Secondus can unite the zone. He has the reach and capacity to unite all factions in the South-west. He is the person suited for the party at this time, he said.

With these words, Tunde Adeniran and Taoheed Adedoja who eventually featured in the contest after George and five others withdrew only made a mockery of themselves. Two hundred and thirty votes and no vote for Adeniran and Adedoja say more about the influence, power and control wielded by the two kingmakers.

Those who sniff around say billion of naira was expended before Secondus could coast home victory. In fact, delegates from the North and South Zones, it was gathered became overnight millionaires after the convention, because, as it was said by those who saw it all, they were well paid to vote for the ‘right candidate’.   Whether those who are aggrieved like or not, this is a victory for these two men. 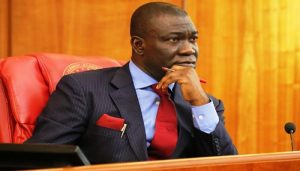 It is arguably not celebration yet for the PDP after its convention. The ability of those who produced its chairman during the convention to manage “their success” from now on to 2019 will to a large extent determine whether or not the party is ready for redemption of Nigeria.

Though it is obviously looking like a house of commotion at the moment, it may be too early to judge anyway.  But certain issues must quickly be determined and resolved if the party must make any serious come back.

Ikwe Ekweremadu, Deputy Senate President from the South East and the most senior political officer on the platform of PDP in the present administration chaired the PDP Post-Election Review Committee that zoned the 2019 presidential ticket of the party to the North and the position of national chairman to the South.

Ceteris paribus, Ekweremadu was positioning himself as the Vice Presidential candidate if the North as agreed in the report takes the presidency and South, the national chairman. But with the result of the last weekend convention, the South West, it obvious can only be assuaged with the position of vice president, some analysts are saying. So what does the South East get afterward?

It is not clear how the men who decide who gets what now in PDP are going to arrange the house. The belief which people like George and Adeniran carried to the convention was the zoning arrangement in 2016 among the party leaders which gave the office of national chairman to the South-West, with the understanding that the South-East will take the slot of vice-president.

Now that the South East as traded -off what could have been a golden opportunity to have shot at the presidency, this is the beginning of an end for a party that is seeking to wrestle power for APC in 2019.

Under these men, can the PDP get it right especially with what seems to a false start? Despite the return of Atiku Abubakar to the party, hoping to find a platform for his presidential ambition, Ahmed Makarfi, is actually the man Wike and Fayose are rooting for. Between Makarfi and Atiku, there’s none of the two who could still be said to be a match for President Muhammadu Buhari if he decides to run again. If the President runs again and PDP fails to arrange its house and bring a people’s choice as its candidate, it does seem that it will still spend another four year as opposition party.