The commissioning of the Akanu Ibiam Airport, Enugu on Sunday by President Muhammadu Buhari, represented by Hadi Sirika, Minister of Aviation

Thirteen months after the closure of Akanu Ibiam International Airport (AIIA), Enugu for massive reconstruction, upgrade and repairs of its facilities, the Federal Government on Sunday reopened the terminal with fanfare.

This was as President Muhammadu Buhari gave approval for immediate commencement of domestic services, while international flights would begin when the country’s airspace is reopened for such services.

Five State Governors from the South East, three cabinet ministers , 20 National Assembly members, most State House Assemblies of South East and their speakers and several other Very Important Persons (V.I.Ps) were present at the epoch making event, which the speakers said would further enhance development to the entire South East region and increase revenue generations to the coffers of the Federal Government.

Buhari who was represented at the occasion by Hadi Sirika, the Minister of Aviation said that the Federal Government would continue to ensure developments in all the regions of the country without political consideration.

Sirika in his speech said that the Federal Government realised the importance of the airport to the south east and decided to approve N10billion under special funding for the project to commence.

He disclosed that the government had approved the sum of N1billion for the commencement of international and cargo terminal buildings, which he said would further attract investors into the state.

“The airport we are commissioning today is immediately open for local flight services as from today. And for the international flights, we hope that Ethiopian Airlines and other international carriers that have indicated willingness to operate into this facility will come in immediately the Federal Task Force on Covid-19 gives its approval,” he said.

”This airport is very vital to the development of South East States. This runway was in deplorable condition when we started. The market, which has now been relocated was an accident waiting to happen as it bothers on safety of users of this facility. Birds could attack aircraft flying into or out of the airport, which is not good for safety.”

He also lauded Governor Ifeanyi Ugwuanyi, Mr. David Umahi, the Chairman of South East forum and National Assembly members for their supports towards the successful completion of the project.

Also speaking, Ifeanyi Ugwuanyi, the governor of Enugu state in his comment lauded President Buhari, Sirika and others for the completion of the project.

He said that the state government had ensured removal of obstructing structures, including construction of a 1.3km of road and demolition of houses and malls to pave way for the successful completion of the airport.

‘President Buhari’s support for the state is unparalleled. Despite the Covid-19 pandemic, Sirika still showed the zeal to complete the project. 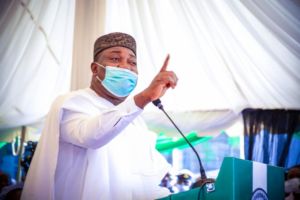 He assured that the state government would continue to ensure maximum safety and security at the airport.

Umahi in his comment, said that it was a hard decision for the South East governors forum to approve the shutdown of the airport for reconstruction, but said the decision was worth it.

He also commended Late Abba Kyari, the immediate past Chief of Staff to the President for his contributions towards the success of the project.

He also solicited for commencement of international flights from the airport to ease difficulties faced by business persons in the region.

Nnolim Nnajiz Chairman, House Committee on Aviation assured that the National Assembly would continue to support aviation ministry to move the sector forward.

Smart Adeyemi, Chairman Senate Committee on Aviation, expressed surprise at the development within the last 12 months.

Like his counterpart, he said the Senate would continue to support the agencies and the government.

Cspt. Rabiu Yadudu, Managing Director of the Federal Airports Authority of Nigeria (FAAN), described the opening of the airport as a landmark achievement by the Federal Government.

The airport, which is a major aerodrome for the South East Nigeria was shut down in August 2019 for falling below standards.

The Federal Government had approved the sum of N10 billion for the rehabilitation of the airport.

Malami has no powers to grant approval to new NBA – Sagay