Stakeholders in the country including professionals, civil society activists and pro-democracy analysts have urged Nigerian youth to organise and mobilise themselves ahead of the 2023 general elections by participating actively in the political process if they hope to change the current order of the country.

This was the summary of submissions by panellists at the Democracy Day Fireside Chat held at the Sheu Musa Yar’Adua Centre, Abuja on Saturday, June 12, 2021, to commemorate the 2021 Democracy Day with the theme “This Thing Called Democracy”.

Setting the tone for the discussion, the convener and the founder of the Advocacy for One Nigeria Initiative, Chief Kola Abiola admitted that though Nigeria’s democracy has come under serious scrutiny over the years, it was important for all stakeholders including the youth to contribute their quota to make it work. 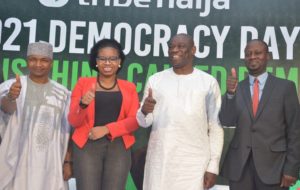 While acknowledging the enormous challenges plaguing our democracy particularly with the spate of insecurity, killings, and mutual suspicion that currently exists among ethnic nationalities in Nigeria, Abiola noted that the decision to create a platform, Tribe Naija, a virtual platform that offers an opportunity for people to share, deliberate and find solutions on various issues affecting us as a nation has become imperative.

Speaking on the theme, civil rights activist, Cynthia Mbamalu noted that the concept of democracy appears to be a bit abstract and alien to people especially with the way it is being practised in Nigeria.

According to her, most people especially the millennial seem to have been shortchanged and alienated with the way government at various levels in Nigeria practice democracy since most of their inactions, actions and policies are not people-centric or a demonstration of what democracy truly represents.

Mbamalu stressed that democracy can only work provided people of different generations could collaborate noting that democracy is a consistent journey.

On his part, Social Entrepreneur, Abdulmumin Yinka Ajia stated that democracy has failed to achieve any meaningful results for Nigeria and Nigerians because past and current leadership across the country assumed power for selfish gains and not for altruistic purposes.

Ajia however noted that the scenario can only be reversed if the millennial, generation Z and other concerned senior citizens come together to forge a common front.

He noted that there was no disputing the fact that a combination of these classes of people holds the ace to take power from the ruling elite.

“We cannot afford to cede this country once again to the select few who are holding the country to ransom with bad leadership. We constitute the majority and must be ready to forge a common front. We must come together to build Nigeria”.

Anti-corruption activist, Hamzat Lawal stressed that the concept of democracy as it is being practised in Nigeria is nothing to write home about especially given what has happened since the return to democratic rule in 1999.

He described what we currently have or practice as a mix of both autocracy and democracy adding that both past and the present crop of leaders in positions of authority have found it difficult to transition from politics to governance.

While admitting that Nigeria’s democracy was still emerging, he said it was important for the youth to understand that there is a clear difference between politics and activism.

Harping on the need for the youth to be actively involved in the democratic process without compromising their values, he noted that it was time they employed strategic thinking in making any political decision as against the practice of electing a leader based on money.

A speechwriter, and politician, Andrew Obuoforibo stated that democracy reflects the true spirits of those who pay the price to have a better society stating that the people that were found on the streets during ENDSARS and struggle for June 12 remain the examples of democracy we are talking about.

Also speaking, Director, Centre for Democracy and Government, Idayat Hassan stated that the youth has an onerous responsibility to organize themselves if they are ready to change the current narrative about the way democracy is still being practised.

Hassan opined that youth must be fully involved politically to experience the change they desire. She acknowledged that achieving this is a herculean task; there is a need for them to build social capital and ride on their numbers to make democracy work for them.

“We need to come out to organize and change the narrative. If democracy would work in Nigeria, young people would need to work. We constitute a major percentage of the votes. To change the game, we need to increase the turnout. As a youth, we need to start behaving like the politician. Politicians plan ahead,” she added.