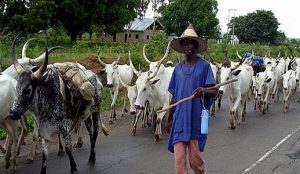 The Human Rights Writers Association of Nigeria (HURIWA) has condemned the persistent failure of the administration of President Muhammadu Buhari ‎to take a drastic action over the armed Fulani terror campaign across the country.

This followed the recent attack in Jos, Plateau State where over 20 people were killed by the Fulani herdsmen.

The rights group dismissed the verbal reaction of President Buhari to the continuous genocide in the state masterminded by armed Fulani herdsmen as hypocritical following his administration’s refusal to do the right thing by legally classifying armed herdsmen as terrorists and deploying military forces to decisively crush them.

Emmanuel Onwubiko, National Coordinator of the group, ‎in a statement issued in Abuja, specifically condemned the pattern of systematic killings that took place in Bassa, Plateau State, particularly the accusations by some survivors that soldiers in the relocated them to a primary school and abandoned them to be callously massacred by the rampaging herdsmen.

Onwubiko said that the taciturn and conspiratorial approach of Buhari’s administration towards adopting objective steps to declare armed Fulani herdsmen as terrorists would obliterate whatever legacy he may bequeath to Nigeria after his tenure in 2019.

He said, “We condemn in very strong terms, the persistent denial of the reality of the armed Fulani terror campaign across the country by the current administration of president Buhari which has so far failed to take concrete, verifiable and legal based actions to put to an end the spectacles of blood cuddling terror attacks of armed Fulani herdsmen”.

He also condemned the United Nations Human Rights Council for rewarding the Buhari’s government with an undeserving membership even when the current administration will go down in history as the most brutal civilian government which has so far grossly breached the human rights of Citizens.

“The current National Assembly has also unfortunately failed to use its constitutional oversight powers to compel the armed security forces and the president to take action to classify armed Fulani herdsmen as terrorists. Is this because both President Buhari and Senate President Bukola Saraki are Fulanis by origin?”

“Why should the United Nations allow Nigeria to win a re-election into the discredited UN human rights council on the very day that armed Fulani herdsmen continued their murderous genocide of farmers in parts of Plateau, North Central Nigeria dominated by Christians?” he queried.