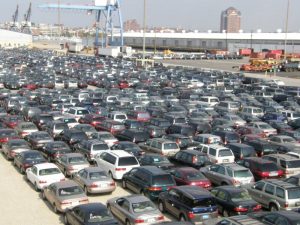 The Nigeria Customs Services (NCS) has intercepted 27 Toyota Hilux vans suspected to have been smuggled into the country.

According to Aminu Dangaladima, Deputy Comptroller General (DCG) Enforcement, Investigation, and Inspection, the vehicles which valued at N432 million, were intercepted along Kubwa expressway in Abuja over non -payment of custom duty.

While conducting journalists round the vehicles at the Customs headquarters on Friday morning, Dangaladima said based on credible intelligence, operatives of the Federal Compliance Team on Wednesday evacuated the vehicles from two car stands.

He said, “We urge owners of the vehicles to come forward with evidence of duty payment or face the risk of total seizure and outright forfeiture to the federal government.”

Dangaladima noted that each of the vehicles was estimated at a cost and Duty Payment Value (DPV) of N15million which totaled the N432million.

In September, the Service seized 18 assorted vehicles out of which 13 were bullet proof, from the Central Area in the Abuja city centre.

Hameed Ali, Comptoller General of Customs (CGC), at a recent lecture at the IBB International Golf and Country Club in Abuja said the Service has seized 3,665 vehicles between 2015 and 2017 with Duty Paid Value (DPV) of N13.164 billion.

Dangaladima also said more arrests have been made on the over 3,000 arms smuggled into the country from Turkey this year, just as Col. Ali will leave for Turkey with President Muhammadu Buhari next week to hold bilateral talks which should put an end to the many smuggling cases from the country.

Police Not Looking for Me says Obla