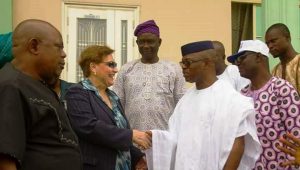 Oni, who stated this at the inauguration of overseas trip for 63 students of Ekiti origin sponsored by his campaign organisation, said the programme has no political coloration as some people may see it.

According to him, the  programme is to put Ekiti youths in the world map again, noting that, “What we are trying to do is to make an Ekiti person an international potential. This is not about politics, but  about putting our children on the world map.

“No power, no conspiracy, and no amount of intimidation shall stop our resolve to better the lives of the youths. It’s a revolution that no one shall be able to stop or derail. We are determined and would not be deterred, this is a new social and economic order.”

The governorship hopeful explained that the programme was designed to put youths in the state into right pedestal in other for them to effectively manage their future and also contribute to build Ekiti of their dreams.

The beneficiaries, who were ages 18 and above were selected from an open screening across the 16 local government areas of the state, by the Segun Oni’s Campaign Organization for entrepreneurs programme in one of the leading tertiary institutions in Brazil, South America.

Speaking while inaugurating the beneficiaries in Ado-Ekiti,   Maria Figueiredo, Brazillian Consulate-General, explained that the progrmme would serve as an avenue to build mutual relationship between Nigeria and Brazil.

She urged the students not to see Portuguese language spoken in Brazil as an obstacle to their study, noting that the language was one of the foreign languages spoken widely in some parts of African, which she said can be easily grasped by them .

The Brazilian Consular-General assured the beneficiaries of every support within her capacity and charged them to focus more on the programme.

In her words, she said “l am very pleased to be here, you are our favorite, you can be assured of our cooperation with the Consular in Lagos.”

Speaking at the event,  Ife Arowosoge,  Director-General of the Segun Oni Campaign Organization, thanked the parents for allowing their children to participate in the programme, advising them to always look after their children to make sure they get the best out of the scheme.

Noting that Chief Segun Oni was the first governor to have created the Scholarship Board in Ekiti, the he said, “Ekiti people are begging him to come back and contest because of the laudable programmes like this.

“He has done it before as Governor between 2007-2010 by becoming the first governor in Ekiti to create Scholarship board and he will do more if elected again as Governor”.

Tayo Ajayi, Director, Segun Oni Young Progressives and the coordinator of the scheme, said the move is to ensure that the future of the state is handed over, not just to the youths, but the educated and focused ones.

“We are very concerned about the future of our state, hence, we have to start now and this is one of the steps we have lined up to achieve the goal.

He described the beneficiaries as lucky and urged them to make the best use of the opportunity and take it seriously, noting that, “without the youths, this state and the country as a whole can not develop.

Ajayi however warned the beneficiaries not to attempt to abscond, saying that, their guarantor would be made to dance to the music should any of them run away, therefore, “I don’t expect any of you to put the person who has stand for you to have a great future and better tomorrow into trouble.

“We have agreed with your guarantor that they will sign an affidavit in court that none of you will run away and that anyone that abscond, the guarantor will have to answer some questions.

“Therefore, I want to urge you to be of good conduct and representatives of our state.”

Responding on behalf of the parents of the beneficiaries of the Scholarship scheme, Mr Olubunmi Ajayi said, “we are proud of Chief Segun Oni for the programme. It’s one of its kind. We are solidly behind him and we pray that his aspiration to become Governor again comes to pass.”

He said that the programme would go a long way to help them in their academic pursuit, noting that the programmes was unique because, while some aspirants were distributing rice and fowls, which would be consumed and passes out as waste, Segun Oni was offering a life time assistance in the way of scholarship.

“With the offering of foreign scholarships to these 63 students of Ekiti indigenes, it is crystal clear that he was not giving them fish to eat, but teaching them how to fish and be on their own, thereby making them to be a developmental tool for the Ekiti of our dream tomorrow.
“We are proud of Chief Segun Oni”, he said.

It will be recalled that precisely on August the 10, 2017 the former Governor launched “The Youth Progressives” (TYP) an organization aimed at bringing out talents out of the youths drawn from 177 political wards of Ekiti State.

At the launching, the leading gubernatorial aspirant announced the opportunity of Foreign Scholarship Scheme for the youths, leading to the selection of the 63 Ekiti Youths for an undergraduate studies in Brazil.

The students are expected to depart Nigeria for Brazil in February, 2018 to commence the Brazilian academic year.