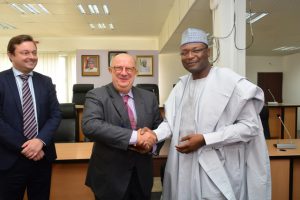 Mahmood Yakubu, Chairman of the Independent National Electoral Commission (INEC), says the Commission is determination to make the 2019 general elections better than the 2015 version.

Yakubu who spoke at a meeting with members of the European Union Election Observation Mission (EU-EOM), who came to the Commission’s headquarters in Abuja to review the progress made on the recommendations contained in its Report on the 2015 general elections, said the countdown to 2019 had already begun with preparations and careful planning in full gear.

He revealed that the Commission has now successfully conducted a combination of court-ordered, end-of-tenure and by-elections into 172 constituencies since the last general elections.

His words: “The last election was conducted about three weeks ago in Lagos and the next election is taking place in nine days in Sokoto.

“We have also fixed the Anambra governorship and state constituency elections for 18th November, 2017.

“Furthermore, we have already released the Timetable and Schedule of Activities for the Ekiti and Osun governorship elections, to be held in July and September next year.”

He told the delegation that while the Commission appreciates the 30 recommendations contained in the EU-EOM Report, only eight were within the powers ad primary responsibilities of INEC.

The eight specific issues under the purview of the Commission include organizational and operational planning within INEC; transparency and making information of public interest available and accessible; Biometric identification of voters; voter education, voter Register and the enrolment of new registrants; and the issue of exclusion of aspirants by political parties on the basis of wealth.

Others are: Merger of accreditation and voting; increase in the number of polling units and public display of election results at lower levels, particularly results emanating from the Polling Units and Collation Centres.

On delimitation, Yakubu observed that although, the Committee on the Delimitation of Constituencies was a responsibility vested by law in the Commission, “but to discharge that responsibility, we must work with other agencies of government and the National Assembly.”

He said the Commission had taken steps even beyond what the Report recommended on political parties.

Speaking on the ‘On Out-of-Country Voting’, he said: “We have citizens of Nigeria living outside the country who have the right to vote. We are looking at various options, but the only constraint is the law (which states that an individual can only vote where he or she registered).”

On the establishment of Alternative Mechanism for Resolving Electoral Disputes, he told the delegation that the Commission has established a full department specifically devoted to the concept.

He explained that efforts were also being made to ensure inclusiveness, with regard to persons with disabilities, women, youths and other disadvantaged groups, in terms of access to the polling station and participation as candidates in elections.

He observed that for the November 18 Anambra governorship election, arrangements were being made to provide magnifying glasses for albinos, in order to make it easier for them to read the instructions on the ballot paper and cast their votes.

The Team Leader, Santiago Fisas commended the Commission for organizing a successful 2015 general elections, which he also attributed to the commitment of Nigerians to democracy.

He noted that the recommendations contained in the EU-EOM Report were only given to assist the government of Nigeria improve on the electoral process and not intended to dictate what the federal government should or should not do.