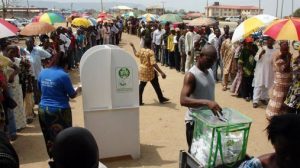 By Tunde Oguntola, Abuja
Ahead of the 2019 elections, Joy Emodi, a former  Senator  has called for inculcating a culture of greatness and integrity in the country’s political system.
In her address during the Impact Leaders Forum, held on Saturday in Abuja, organized by The Change Embassy Ministry International, entitled: “Building a Culture of Greatness Through Leadership and Integrity” Emodi who was  also Special Adviser on National Assembly Matters to former President Goodluck Jonathan, said the auspicious topic emphasized the need to reinforce commitment to high ethical standards and selfless choices, as the country is slated to go to pools once again.
She argued that integrity deficits in the country political system have over the years zenith a major reason why the nation has progressively retrogressed.
“Fifty seven years after independence, we are still far from the point where we trust, and confidence amongst and between us defines and drives relationships and interactions at all levels in the country,” she said.
Earlier in his address, the convener, Impact Leaders Forum,  Bukola Williams stressed that the project is intended to unite and further equip the teeming population of both the young and old in contributing to the development of Nigeria.
Williams who is also the Lead Pastor, The Change Embassy Church International noted that, nation building is not the exclusive responsibility of the government and its allied institutions but for all citizens.
“The church is positioned by God to be instrumental to this task. Until the church adds its voice from an unbiased and justice-driven perspective, the challenges of nation building would weigh down the currently serving institutions,” he said.
He averred that  the days when people are cajoled into voting on sentiment are fast going into extinction.
He added that the tide is changing, awareness is building as the church is rising to its place in determining the course of the nation.
Tags: 2019 electionsfeaturedJoy Emordi
ShareTweetSendSend